The Great Albini is a slot that centres around a successful magician as he performs a series of tricks for the audience. To keep the players interested as well, the game also includes wilds, free spins and re-spins.

The game was released in 2019 by relative newcomer Foxium who are hard at work establishing a name for themselves. This slot included a collection of interesting features, a number of animations and a nice style to set itself apart. Players will spend most of their time on the main 5-reel, 3-reel playing field. If they manage to activate the free spins mode, they’ll instead play on a 5-reel, 6-row playing field.

When it comes to its presentation, the game really hammers home the idea that you’re watching a magician’s show. The Great Albini himself is present during the entire game, standing to the side and occasionally performing a magic trick that influences the gameplay. There is the usual divide between low- and high-paying symbols, with card letters for the low-paying ones and original symbols for the ones that are worth more.

The game comes with quite a number of animations. Although the graphics are 3D and I don’t think they are ageing well, they do show a lot of detail. I also liked that the magician and his assistant are animated whenever they are on the screen. It makes the slot feel more alive and it is almost like we’re actually watching a show.

The Great Albini offers a number of original symbols and simple card letters to fill out the assortment. There are a total of 25 paylines active during the base game which is increased to 50 if the free spins mode is triggered. While the high-paying symbols are all unique and make sense in the show, the card letters aren’t as inspired even though they do come with original designs. It’s odd that they didn’t put the card letters on actual cards, since those would actually fit the idea of a magic show quite well.

With average payouts, a reasonable opportunity at getting wins and an average number of symbols, it’s no surprise the game is listed as Medium Volatility. Players will likely see a regular but spaced out number of wins as they play but keeping big wins to a minimum. To change the speed at which they go through their funds or to adjust the size of their wins, players can choose to augment their bets. There is the possibility to pick a bet between £0.25 and £30 per spin.

When it comes to winning, the game isn’t too gratuitous but it did happen occasionally in my experience. Players will also have a shot at the max. win of 4,000x your bet. This is quite high considering the volatility but that doesn’t mean it’s easy to reach.

The symbols that are included in the game are:

The Great Albini has a number of features that I would call an average amount. There aren’t a lot of them but the game isn’t barren with features either. Players will be regularly surprised by any of the features appearing, although the free spins mode was by far the rarest.

When it comes to an overview, you can expect the following features to make an appearance:

Players should be familiar with all these features individually, and the game does a good job explaining their functionality visually if they don’t. I don’t think it will take even new players long to figure out the way the features work and can begin to enjoy the gameplay.

The Great Albini is a good effort by the studio at showing what they’re capable of. The 3D graphics are already starting to look somewhat outdated and the animations aren’t the smoothest but I appreciate the effort and can look at other studios that don’t put in the time.

When it comes to the gameplay, I found the slot to be rather engaging although it can be punishing. When I increased my bets I found that I went through my funds in only a few spins. I would strongly recommend players start with lower bets to get a feel for the gameplay before they consider increasing their bets.

All in all, the slot is a great game for players that enjoy the classic video slot experience with some nice features included to spice up the gameplay. It will reward you with smaller wins throughout your time playing, but bigger wins are rather far and few between.

Play The Great Albini for free

Browse casinos with The Great Albini and other slots from Foxium. Create an account and try the game for free before making a deposit.

You can play The Great Albini in English, Finnish, Swedish, German and 22 other languages. 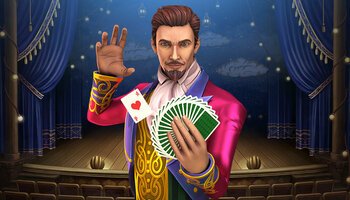