The Green Knight rides like a storm with his army of multiplier wilds into a massive adventure on three rows and five reels.

Play'n GO revives the success of its high-variance Sword and the Grail slot by rehashing the theme of chivalry, but in a darker, more mystifying realm.

I wanted to play The Green Knight from the moment it was announced. The previews introduced a style of gameplay that I'd like and my expectations proved correct.

The game has a fun base game where the potential winning combinations can benefit from the multiplier wilds. The same can be true for the free spins bonus feature, but there is a slight twist that holds the key to payout amounts that are nothing short of astounding.

After all, The Green Knight is a highly volatile game with a maximum win potential of 10,000x your bet from a single spin.

The graphic design responds to the task of creating a world of epic knights and supernatural entities. There isn't a single detail that I don't like about the game. As you can expect, there is a Green Knight symbol on the paytable and it is very important to the gameplay.

That symbol and the Wild are vividly animated. The high-paying picture symbols respond to winning outcomes too, but my favourite detail is made for any winning outcome thanks to the green liquid visual effect.

Another note - you can't miss the soundtrack. Although the music isn't a full-blown orchestral piece, the combination of sound effects and the tune makes for a fun-loving auditory experience.

I like the fact that Play'n GO didn't overload this release with features. There are only two that complete the gameplay and complement the payout potential.

The Wilds can arrive at any position on the reel set. As I was playing the game, I realized that the probability machine isn't shy about posting Wilds.

Seldomly, there can be three Wilds from the same spin but seeing two connect for a win has been a common sight for me. Also, you won't see too many multiplier Wilds in the base game, however, they are the norm in the free spins bonus.

During the free spins bonus, the Wilds can range between 2x and 100x your winning outcome, on the payline where the Wild substitutes.

There is another role for the multiplier wilds - one that holds the key embarking on a big win sequence, but that's tied to the second aspect of the bonus feature.

You need three or more Green Knight symbols to trigger five free spins. The Green Knight is also a paying symbol with values of 2.5x, 5x and 100x your bet if three, four or five land on the reel set.

Five spins may seem like very few, but there is a reason for the number. I found this out the first time the bonus feature triggered.

If you get two Green Knight symbols on the same spin the game awards you 5 Shield Spins.

The difference between this and the initial bonus mode is that every multiplier Wild landing on the reel set becomes sticky.

In the regular free spins bonus, multiplier Wilds progress, but here, you can get the benefit of a guaranteed multiplication factor of at least 2x your winning outcome.

I said that Green Knight isn't overloaded with features, yet it feels like there is a lot happening. Thanks to the two Green Knights extensions, you can advance your bonus feature and potentially make more cash.

Typical for a Play'n GO production, you can lay bets that are as low as 10p per spin. The maximum is £100.00 and there is a wide range between these numbers.

Considering the win multiplier Wilds, this is a game that I prefer playing with bets that are higher than what I have for a norm. Instead of 25p or 50p my bets fluctuate between 80p and £1.60

This way, when there is a big hit, the sum just looks a lot prettier when it's been triggered by a bet that isn't a handful of pennies. In my opinion, The Green Knight can make it worth it.

In terms of its payout potential, the paytable doesn't depart from what I've recognized as standard structure in recent times.

Outcomes for three and four of a kind royal cards can pay between 0.2x and 0.8x. It isn't spectacular, sure, but a multiplier Wild can easily change that impression.

The full payout structure is as follows:

My highlight of the game is the multiplier Wilds and the potential payouts with the Wilds during the free spins bonus. It goes without saying that The Green Knight is a great continuation of the impeccable game mechanic in that other game I mentioned at the top.

The game at hand is fun, dynamic and has positive values all around, including a theoretical RTP of 96.27%. Overall, it’s a great game that you can try with at least 10p per spin, see if it’s your cup of tea.

Play The Green Knight for free

Browse casinos with The Green Knight and other slots from Play'n GO. Create an account and try the game for free before making a deposit.

You can play The Green Knight in English, Finnish, Swedish, German and 30 other languages. 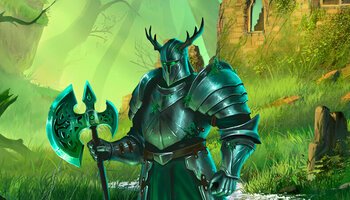