99% of the people are definitely not into seeking out their "path" in life. You'd have to be alone in the company of an old guy who is supposed to be your sage while walking through woods and talking to animals. I am describing The Hidden Temple slot by Push Gaming here and I am so much at a loss of words that I don't even know where to begin.

Hands-down, this is one of the most bizarre games I've ever played. I was staring at the screen trying to figure out what exactly is happening on the reel set below and how that affects or coincides with the animated clips above. And in the end, I really don't know because I gave the game about 45 minutes of my life (not regretting it a bit) and felt no more enlightened than a Zen apprentice on his first day of scrubbing the deck.

So what is The Hidden Temple really about? By the look and feel of it, the game is a classical slot on the merit of its three reels and three rows which spin across 5 paylines. But there is more than just that, in fact, there is a lot more in terms of gameplay. Above the reel set is a screen that shows different scenes from the life of a boy who is looking for a hidden temple. This entails making a selection from a number of Japanese Torii gates on a map and a lot of journeying, which is part of the game's extra features.

In terms of gameplay specifications, players are going to encounter a low variance math model and not a very high payout potential. This is probably one of the few games where I could be wrong regarding how much you can get from a single bet. It seems that this figure is about 100x your bet, but then again, The Hidden Temple is a very strange game.

The theme could be a nod to an obscure Japanese manga based on a legend about a boy who searched for a hidden temple. Push Gaming has really pushed it with this one. I am yet to find an online slot with rolling animated footage that somehow pertains to the gameplay.

I caught myself staring at the roll above the reel set while mechanically pushing the 'Play' button on my mobile, in an effort to make sense of the storyline and how these relate to the winning outcomes. At least The Hidden Temple slot is not shy of animated sequences - quite on the contrary, which makes it somewhat appealing, but then you've no idea what the story is about so it all works out in the end by the merit of my being blissfully ignorant.

The winning outcomes do ring it just fine as each one is marked by a light flashing spasmodically all around the playing field. Sound-wise, Push Gaming has included a tune that fits the theme of spiritual journeying meets video game console adventure from 1992. Overall, is it a slot game, is it a game of chance wrapped in an arcade? I-don't-know but I definitely went for it!

The Hidden Temple has a couple of extra features under the belt and these can trigger any time during the gameplay. The question as to how and what unfolds following the triggering of a feature does not get an easy answer. The text on the paytable reads like the manual of a bomb-diffusion kit, but I gave it a try anyway to see if any of it corresponds to the events on the reel set and on the screen above it.

Anyone who dares try The Hidden Temple needs to master the art of placing a bet. In order to successfully do that, you need to select one of the silver medallions below the reel set and place it into the coin slot on the right. You can make three bets per spin, which raises the total stake and the potential payouts.

Once you are ready to make your first spin and nudge this hero onto a different turn on his life's path, you simply need to push the flat red button on your left. Strangely enough, the lowest bet is not that low for a bizarre three-reel slot machine. I wanted to try it with the lowest possible wager and that was 10p per spin.

In terms of symbols, the game has seven in total, including the Respin symbol and the cherries. The lowest payout is 2x your bet for getting a single cherry on the first reel. Two and three cherries on a payline pay 2x and 4x your bet. The bells, watermelons and the game logo pay 6x, 9x and 12x in that order, while the biggest potential payout is for three red or blue sevens - 15x your bet in both instances.

So what did playing The Hidden Temple do for me? It seems like the math model is keen on taking a little and giving a little back each time you press the Spin button. The volatility is low so it makes sense why my balance was always close to the starting point. I guess the only way to make a difference in the positive is to land consecutive winning outcomes in the bonus feature, which is possible, otherwise, the base game can be quite consistent with both the hits and misses.

If you really want to try something different, as far as online slots go, then you are welcome to play The Hidden Temple. You'll be weirded out just how strange the game is. The story on the screen will take you through different scenes, meeting different animals and temples on the map. I guess I have not immersed myself fully into Japanese culture in order to 'get it'.

Play The Hidden Temple for free

Browse casinos with The Hidden Temple and other slots from Push Gaming. Create an account and try the game for free before making a deposit.

You can play The Hidden Temple in English, Finnish, Swedish, German and 16 other languages. 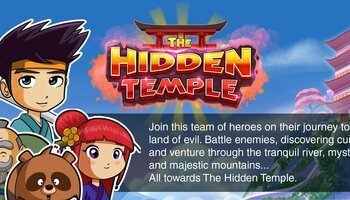