The Invisible Man is a homage to the classic monster movie. It’s filled to the brim with atmosphere and special modes.

The story of an invisible man has been told throughout the ages. The first known text is from Plato’s Ring of Gyges, and many famous writers have had a go with the idea. H.G. Wells wrote The Invisible Man, Jules Verne did The Secret of Wilhelm Storitz and so on.

The invisible man has made it to the silver screen as well. One of the most famous films is the 1933 Universal classic, simply called, The Invisible Man. It is based on the H.G. Wells novel featuring the same Jack Griffin as the titular character.

That movie is also the source for the NetEnt 2014 The Invisible Man slot, which is fully licensed from Universal Studios. Five reels, 20 pay lines and tons of special features are waiting for the curious movie fan.

NetEnt came out swinging with The Invisible Man when it comes to the audio and visuals. This game looks gorgeous. It has a dark and grimy Art Deco look, that really hits the mark -Tarnished gold, smoky lab equipment and frightened people set the scene well.

The player is sucked into the gritty atmosphere, and feels part of the story. When I played The Invisible Man, I found myself rooting for Jack Griffin and wanted to see him outsmart the police. One reason might also be that Griffin has the better bonus game, which I wanted to play more often.

The music and sounds suit the theme well, and you can even hear sound clips from the original 1933 film. I found myself keeping the game open in the background, just to hear the music while I was doing other things. That is a lot to say for a mere slot machine.

When you start to play, the game seems like a calm, even timid experience. Gameplay begins with just the traditional number symbols and a selection of characters from the movie. Dr Cranley, Arthur Kemp and even the doctor’s daughter, Flora Cranley are all there. For now, the only thing that is out of the ordinary is that you can win both ways.

The game truly begins when you start dropping wilds into the mix. There are two of them, one for the police and one for Jack Griffin, the invisible man. The special features are multi-tiered and for me, a big reason to come back. I wanted to see how the story evolved for both parties and see just what was in store for them.

The Invisible Man is a thematic slot, with a heavy focus on the story. I found myself playing the game just to see how it would unravel. If you are interested in either the classic monster movies or just want a game with some actual story elements, this is a game for you.

The base game might seem bland, but things do get wild with the wilds. The special features and bonus games are the main reason why you’d want to play this slot and keep on playing it. This is not a good game for just a few quick spins. You need to sit down and play it properly to enjoy it.

This is also the weak point of the game. I found that the base game gave out measly wins. If you are able to double your wager, you must have done something right. The game doesn’t start until the wilds start walking. If you ever want to get big wins, you need to hit the special features.

For me, this is a great game. I love the atmosphere, the music and the characters, and I wanted to follow the story. These are the key factors in determining whether this game is for you or not.

Though, there is one more option here. If you like the mechanics, but not the theme, NetEnt has got you covered. They released a Christmas-themed version of the same game in 2019, called Santa vs. Rudolf.

Play The Invisible Man for free

Browse casinos with The Invisible Man and other slots from NetEnt. Create an account and try the game for free before making a deposit.

You can play The Invisible Man in English, Finnish, Swedish, German and 20 other languages. 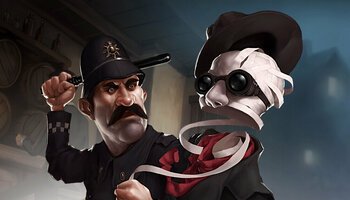