The King of Rock was a rarity among hundreds of performers, so I guess we can liken his image to that of a panda. Both have character, talent for showmanship and popularity so why not call a game The King Panda.

Players can enjoy a show on the reels for as little as one penny per spin, but the maximum payout potential is contrary to what is cheap because players can win up to 10,000 coins on this game.

Booming Games are the slots experts behind this Elvis Presley - Ultra Cute Panda Bear mashup and I've taken note of it. Yes, the mascot is adorable and definitely the attention-getter for this game, but the simple one-payline layout and the potential prizes are the true reason why I'd shake a pelvis to this tune. If I ever get to a hefty payout that is.

Besides the cool supersized image of the Panda Elvis, The King Panda slot is designed like most of the one-payline slots that come with three payout columns.

The symbols are references to showbiz and classical slot machines. The microphone, disco ball and gold record are in the middle of the paytable, in terms of value and the three variants of the BAR symbol are the basic payouts.

Sadly, you don't get to see any of the payouts being crowned by an animated bit on the reels and for that reason I find The King Panda to be a fruit machine that wears a gimmicky mask. Even though the maximum payout potential is quite decent, as are few other winning combinations, the gameplay is just so dry that only pro players will be able to push through for the sake of curiosity.

Simply said, there aren't any. The game lacks even a wild symbol so there isn't anything to nudge the random number generator towards winning outcomes that are outside the paytable.

I guess that's alright because The King Panda plays like a penny slot, even though it doesn't feel like one. Players can try their chance at the 10,000x prize with one, two, five, ten... any amount of pennies that's available as a wager in the range of bets.

The paytable is the most interesting element on The King Panda. Players will find there are three columns or tiers pertaining to the potential winning outcomes. Each column has the same symbol combinations, but different prizes thereof, which depend on how many coins you play with.

The selected bet amount can be played on one, two or three coins. The first coin level is the bet amount as-is, the second level multipliers the bet by two and the third by three. So a bet of £1.00 is the same amount at the first level, £2.00 at the second and £3.00 at the third.

On the other hand, the payouts are significantly different between the three columns or payout levels. Of course, the more expensive the bet the more lucrative the payout and the only way to be able to reach the jackpot prize of 10,000x is by playing any bet amount at the third coin level.

The smallest payout is made for any three BAR variants and the prizes are 10x, 20x and 30x your payline bet according to the first, second and third column. The BAR symbols pay between 20x and 180x across the three different symbol combinations and payout levels.

The middle section of the paytable consists of the microphone, disco ball and golden record is showing payout amounts between 80x and 1000x. Things are already heating up as this Panda Elvis gets in a better mood for rock, because that symbol pays 400x, 1000x and 5000x.

Now, the probabilities. In my close to 200 spins on this game (pennies to be frank) most of the winning outcomes were made for the Any 3x BAR symbols. I wanted to see how close I get to the better payouts and I can say, not close enough.

I guess it would have taken a greater number of spins to hit that jackpot and this is a high variance game which means payouts will be sparse in-between and from the bottom of the paytable. In brief, I am not tempted to play The King Panda again, but anyone may as well give it a try.

Play The King Panda for free

Browse casinos with The King Panda and other slots from Booming Games. Create an account and try the game for free before making a deposit.

You can play The King Panda in English, Finnish, Swedish, German and 23 other languages. 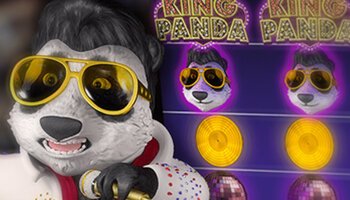