Shangri La may be an imaginary land, but the slot of the same name by NetEnt is as real as the benefits of transcendental meditation.

I can be surprised no more by the span of NetEnt's headspace when it comes to ideas for online slots. This game is a perfect example. It takes a setting that is rich in meaning and tradition and gives it the best possible twist for the players' enjoyment.

I have gladly sought for my inner balance while playing The Legend of Shangri La. Its Cluster Pays payout mechanic is capable of arranging a multi-dimensional meeting with the meditating tiger, which in the best of outcomes can trigger 10,000 coins times the coin value. That's quite the payout and isn’t the only one that can be considered to be hefty.

There are other meditating gurus on the paytable and the possibility of reaping big wins from their presence can be facilitated by the set of extra features which includes a substitution symbol, sticky respins and a free spins bonus. If the theme isn’t quite up to your taste, I find it impossible for the gameplay to disappoint.

I think that NetEnt has struck a perfect balance by opting to base Shangri La in a low to medium variance setting. You get to feel the thrill of wins consisting of entire blocks of the same symbol, while the multiple extra features can crop up at any time to improve your outcomes or to guarantee a win.

The setting of Shangri La is a Buddhist temple situated on an altiplane, amidst a pristine garden that is watered by sloping brooks. It seems like the perfect place where people can get a virtual breather.

Shangri La is, of course, the imaginary land found in a popular novel from the 1930s. It is believed, however, that its description was inspired by the legend of Shambhala, which was supposedly a real paradise on earth that existed a very long time ago.

At any rate, NetEnt has managed to fully grasp the look and feel of such a splendid abode. I was impressed with the graphic design right at the get-go. The set of high-paying symbols in Shangri La have been drawn in a masterful way to represent a meditating tiger, chimpanzee and elephant, who have just had a profound realization of sorts.

A red panda calls the left side of the reel set its home, as it is always there, happy to make gestures that hint at the various events on the reels. I find it lovely the way in which that critter strikes a meditative posture when a big winning outcome is about to grace the reels.

Overall, it was easy for me to get carried away in the graphics and the sound. Both parts of the game are simply amazing and in perfect fit with the gameplay and extra features on Shangri La.

No matter how engaging the base game is, it wouldn’t have fared as well without either one of the features below.

NetEnt has instilled the gameplay with the Cluster Pays system where nine or more matching symbols form a win. A favourable circumstance is that these can land on adjacent reels, but on the other hand, nine symbols are the bare minimum for a win.

Looking at the paytable, I think it fares a lot better compared to other slots from the same company. The low-paying symbols pay 5 coins for nine of a kind, while the three guru symbols pay 20 and 30 coins, which is 2x and 3x your bet.

The majors can post on the reels as double or single symbols that can cover up to 30 positions, for prizes of up to 1000x and 500x your bet for the tiger, and the elephant and monkey symbols respectively.

As it usually is the case, payouts that consist of high-paying symbols occur less frequently compared to minor symbols, but at least in Shangri La, these outcomes pay more than the amount you have wagered. This has been the decisive factor for me to keep this game in the back of my mind.

In my experience, wins that consist of 12 symbols, or more, are common in Shangri La and the extra features are never long overdue. This is thanks to the low to medium variance, which makes it possible for the game to award a rare mega win event. I find it amazing that two of the extra features can amount to guaranteed wins. Whenever a sticky respin or a random set of wilds are triggered by Shangri La, the result may not necessarily mean a trifle payout, as it is usually the case with guaranteed win events in other games.

What else can I say except this is one of NetEnt’s best games and gets five stars throughout. That fact only has warranted Shangri La’s presence on the game rosters of most of the good casinos out there.

Play The Legend of Shangri-La: Cluster Pays for free

Browse casinos with The Legend of Shangri-La: Cluster Pays and other slots from NetEnt. Create an account and try the game for free before making a deposit.

You can play The Legend of Shangri-La: Cluster Pays in English, Finnish, Swedish, German and 20 other languages. 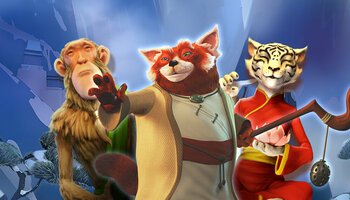