The Legend of Shaolin slot review

The Legend of Shaolin takes place at a Shaolin temple, where two monks stand face to face and fight each other amongst a variety of weapons.

This game was developed and released by Evoplay Entertainment in 2016, setting itself in one of the most famous cultural locations in China. The game has a 5-reel, 3-row playing field with a total of 9 betlines. The background shows us a highly detailed temple with beautiful sharp colours. The two monks that flank the playing field are both animated, showing different combat stances and occasionally making fighting moves.

The symbols are all unique for the slot, using details like traditional Shaolin weapons, the different characters as well as things we generally associate with these sort of temples. The symbols are slightly animated when they’re part of a winning betline.

I found the sound to have a rather mixed quality. The music playing in the background is one based on drums and a whistle, creating an intense Asian sounding song. Meanwhile, the reels continuously make a swishing sound that you’d associate with a sharp object being swung. It got kind of annoying after a while. Any wins in this High Volatility slot come with a more modern jingle that still meshed quite well with the music.

The different symbols in the game are all based on the Shaolin temple idea, each with their own distinct look which made them easy to tell apart. There are quite a few symbols which makes a win quite unlikely, as well as the game only having 9 betlines, explaining the high volatility as well.

There is no free spins mode in The Legend of Shaolin, instead, a Scatter symbol activates a different special feature that runs during the base game. There is a small tracker in the top of the screen that keeps sight of the different features as well as how many spins are still left.

The features in this slot play out during the base game. I found them to be a little difficult to tell apart even though there is a special frame at the top of the screen that keeps track. The features are:

While playing, I didn’t think the Wilds showed up often enough to be very interesting. I would estimate they appeared less than once every dozen spins and even when they did it wouldn’t be a guarantee for a win.

The Scatter symbol was equally as rare, although that made more sense considering the bigger effect it would have on any wins. I found it to only have a limited effect on creating wins though since the most common one was any kind of multiplier which didn’t help at all at making it more likely to get a winning payline.

The only really beneficial special feature was the random wilds one, which would add 2 random wilds to the playing field. Again, this wasn’t a guarantee for a win but it was definitely more likely. Unfortunately, I didn’t see this feature pop up a lot at all.

In general, I would consider the features a nice addition to the game when they showed up, but no player should consider them an intricate part of the slot. Most of the time, you will just watch the slot spin its reels, occasionally triggering a win and if you play long enough a feature might show up.

Evoplay is showing itself competent in making attractive looking slots with The Legend of Shaolin being another example. Then again, I find their gameplay to be often somewhat lacking. I don’t mean that a classic slot is less exciting but that many of their slots have features that are so rare they might as well not be included at all.

The graphics and sound design of the game make up for a lot, giving us something colourful and energetic to look at. I really respect the way the developers create original symbols for all their slots, something that doesn’t often appear in slots made by other developers.

Players that are looking for big wins might leave here disappointed as the max. win of 1,078x your bet isn’t that high considering the high volatility and the lack of opportunities to create bigger wins. Players have the option to pick a bet between £0.19 and £90, which isn’t quite as big a range as other Evoplay slots.

Play The Legend of Shaolin for free

Browse casinos with The Legend of Shaolin and other slots from Evoplay Entertainment. Create an account and try the game for free before making a deposit.

You can play The Legend of Shaolin in English, Chinese 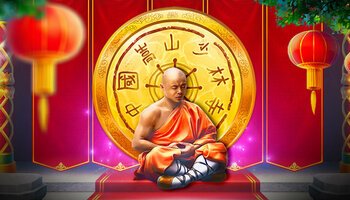