Loved the critically acclaimed movie ‘The Love Guru’? Well, now you can experience all the joy, fun and laughter again by playing The Love Guru slot! It was released in 2019 by iSoftBet and with the familiar characters spinning on the reels, you will feel like watching the movie all over again.

Well… Okay, maybe I exaggerated a little. Having won three Razzies, The Love Guru was a huge flop and with barely 4 stars out of 10 in IMDB it was one of the worst anticipated comedies of the 21st century. It was written by Mike Myers and Graham Gordy, and in addition to Mr Myers, it starred big celebrity names like Jessica Alba, Justin Timberlake, Kanye West and Jessica Simpson. However, because of how bad the movie was it’s also well-known. So, as a slot version, it instantly draws the attention with its name and also with the high RTP.

I can honestly say that I have not played iSoftBet’s slots before. And that the theme of this slot made me cringe. But, let’s not judge the book by its covers and see how the slot feels!

The Love Guru sadly looks and sounds like it was published way earlier than it really was. It looks very outdated and has that old Vegas machine vibe - especially when playing and hearing the sounds of spinning reels and beeps and boops of the buttons.

The graphics rely heavily on the movie, of course. The high-value symbols are mainly the characters from the movie, and I could even find the actual photographs of the symbols while checking the movie in the Internet Movie Database. The art style and music is, naturally, Indian-like.

The music is okay, but the loop doesn’t re-start smoothly. Otherwise, it would be nice to listen, but I chose to turn it off while I played.

The Love Guru has five reels, three rows and 30 paylines going from left to right. The winning combinations are calculated from the first reel and the symbols need to be in adjacent reels, except for bonus symbols.

In the bonus game, you may choose boxes and reveal coin wins, free spins, multipliers and extra Wilds. You can win up to 15,000 coins from this game alone, and a maximum of 20 free spins.

Either iSoftBet intentionally made The Love Guru look as old as it does, or their budget for the game was low. I’m kind of leaning to the latter option. I was very surprised when I found out how young this slot actually was - it came out just a year before my review.

The game works fairly simply. You can change your bet by adjusting the value of a coin and telling the game how many coins you wish to wager per payline. You can play either by clicking the buttons or tapping the space on your keyboard. Or, you can choose to let the game play by itself for a certain amount of rounds.

The game uses coins to announce the bets and wins, which I find a bit annoying. Luckily, the game also presents the actual bet in pounds just below the game screen.

After playing hundreds of spins, I found out three things worth mentioning:

The Extended Wild particularly was an interesting thing. The game itself presents the feature in the starting screen, but after literally several hundreds of spins, I never saw this feature. Not in the base game, nor during the free spins. So, it remains a mystery to me.

I highly doubt that I will return to play The Love Guru again. But, for its defence, the features I did manage to activate were good and the payouts from them quite decent.

Play The Love Guru for free

Browse casinos with The Love Guru and other slots from iSoftbet. Create an account and try the game for free before making a deposit.

You can play The Love Guru in English, Finnish, Swedish, German and 23 other languages. 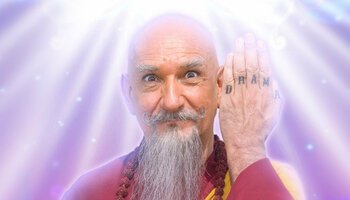