If you are like me, fascinated with magic despite being fully aware that it is an art form, The Magic Shoppe is a game that can steal your interest.

The Magic Shoppe takes you to a magician's studio where you can practice several magic tricks by spinning the reels. I've found the gameplay to be quite entertaining and that is a big plus in addition to the maximum payout potential of 513,000 coins times your payline stake.

I think 25 paylines is the perfect number of potential outcomes for a playing field of three rows and five reels. If you are thinking about whether to try The Magic Shoppe, I'd like to underscore two of its strongest suits. A theoretical return to player (RTP) of 96.85% and the fact that the free spins bonus comes with guaranteed wins.

In short, here is a game that takes you to a show of magic but doesn't pull any cheap frills.

The theme has presented the designers at Betsoft with the possibility to create a visually captivating game. What may appear to be a cluttered magician's studio (can it be any other way?) is a clean-cut slot game with superb visual effects. All of the symbols light up when they become part of a winning outcome, but each of the special symbols can perform its exquisite little trick.

The paytable consists of low and high-paying symbols, a Wild, a Bonus symbol called Magic Wand and two boxes that are wrapped in chains and shuttered with a padlock. All of this puts together an entertaining story that succeeds in keeping me into the game. I have no doubt that most players aren't going to find any fault with the design, even though The Magic Shoppe was released in 2017.

I think that enough is going on both in the base game and in terms of extra features. The Wild symbol can trigger its own extra feature and there are two free spins modes which improve The Magic Shoppe's x-factor towards landing bigger wins.

Wild Symbol The standard Wild can substitute for all symbols except for the Magic Wand and the Sun and Moon bonus symbols. In addition to acting as a substitute symbol, landing three, four or five wilds on a payline can pay 32x, 48x and 96x your bet. Appetizing sums like these can be rarely seen for matching Wild symbols, which makes The Magic Shoppe quite unique in that respect.

Magic Wand Bonus This bonus feature is simple. If three of these symbols land anywhere on the screen, the game will convert all Magic Wand, Sun Box and Moon Box symbols into wild. This feature improves the odds of landing three or more wild symbols on a payline, in exchange for a hefty payout.

Sun and Moon Free Spins Apparently, this magician dabbles in alchemy too because he or she can harness the duality of the sun and the moon. Two symbols can trigger a bonus game where winning outcomes are guaranteed.

You need to get three, four or five red or blue boxes to trigger three, six or 12 free spins. Each spin can bring either a payout or retrigger the bonus. One caveat to this is that the Magic Wand feature is ruled out from triggering.

Double Up This may not be an extra feature per se, but it does allow you to further wager your winnings in a hit-or-miss game of chance. To activate the Double Up feature press that button at the bottom following a base game win. Although I don't rely on this option, sometimes I like to risk a symbolic win for a chance to double it once, twice or three times over.

The Magic Shoppe comes with a decent range of bets. Winning outcomes are multiplied by the payline stake, which can be between one penny and £1.00.

In terms of potential payouts, The Magic Shoppe can return your bet at the King card level. This is quite rare in comparison to most slot games that were released in 2019 and 2020 where the entire focus was on high volatility outcomes.

In other words, I think the symbols reflect relatively generous amounts.

The card symbols are between the 10 card and the ace and can pay between 0.20x and 6x your bet.

Over to the high-paying symbols, we have an entirely positive payout structure, meaning, nothing below your bet, even for three of a kind.

And as I said, the Wilds are exceptionally lucrative as they can pay bonus amounts of 32x, 48x and 96x your bet for three, four and five on a payline.

Down to the basics, Betsoft has made a game that is totally entertaining and comes with a rather voluminous max payout of 4,104x your bet. That’s better than most older games by the same company. In terms of volatility, we have what I consider to be Betsoft’s trademark ‘medium’ and I am fine with that.

Winning outcomes can swing between three of a kind cards and four of a kind mids, for the most part. I got a number of high-symbol wins, with the help of the wilds.

To conclude, I can recommend The Magic Shoppe to any player. I’ve enjoyed its vibe and the graphics which I don’t think have aged poorly at all. As for the pay potential, it’s there - just hope for a lot of Magic Wand symbols coming your way.

Play The Magic Shoppe for free

Browse casinos with The Magic Shoppe and other slots from Betsoft. Create an account and try the game for free before making a deposit.

You can play The Magic Shoppe in English, Finnish, Swedish, German and 22 other languages. 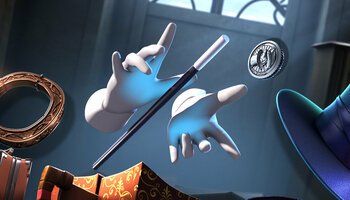