The Paying Piano Club is a game that will bring players back in time to the Dirty Thirties when the American nightlife was lived mostly in speakeasies and night clubs, all with a Jazz soundtrack. The slot attempts to brings this to life in a special way with Stacked Wilds and free spins to really help it along.

This game looks great which makes sense seeing as it was released in 2021 by popular studio Play ‘n GO. The setting and theme are brought to life by some excellent design choices, which include the art and animations, as well as the attention to details. Players who are in any way interested in the setting should give it a try for that reason alone.

The game is set in the Paying Piano Club which is shown by having the background be a part of a bar with the reels spinning on a musical sheet device. In the corners of the screen, we can see a glass of port and a smoking cigarette. The 3-reel, 3-row playing field itself meanwhile is filled with different symbols. The high-paying ones mostly consist of instruments, the Wild and Scatters symbols are different patrons and musicians and the low-paying symbols are only card letters.

I wouldn’t say the game is a classic fruit machine but it does have a smaller playing field than most video slots, and only 5 paylines on which to get a win. The game also doesn’t have a lot of features, with only Wilds, Stacked Wilds and Free Spins to distract from the basic gameplay. If that’s positive or negative, I’ll leave that to you.

The Paying Piano Club features quite a number of symbols for such a limited size game. The playing field is small and there are only a handful of win lines. As a result, the slot comes with High Volatility and players should be prepared to wait quite a while to get even a single win. When it does happen, the wins are regularly not even big enough to pay back more than one or two bets.

This all leads to a steady decline in funds and will expect the player to stick around for quite a while in order to see if a big win brings it back up to positives. Players are able to choose their bet, with the possibilities ranging from £0.05 to £100 per spin. Those few that manage to hit the jackpot, will walk away with a max. win of 5,000x their bet.

Symbols in the game include:

The Paying Piano Club is a slot that likes to look like a classic fruit machine in terms of gameplay, but it does have some more modern slots. These won’t be anything special or exciting for all but the newest players, but I thought they helped the game have slightly more diverse gameplay.

The features you’ll find in this slot include:

Most of the game will take place during the base game, with even the Wilds being quite rare. An advantage to the smaller playing field is that when the Wild does appear, regardless of which reel it’s on, there is a reasonable possibility it will trigger a win.

Stacked Wilds are even less frequent but often help facilitate a number of wins at a time. The game calls it a feature but with only 9 tiles on the playing field, it might also just be a random occurrence. Either way, the entire reel is filled with Wilds and makes it possible for players to get a win this way.

I found the free spins mode to be rather difficult to trigger, but it does activate now and then. Getting into the free spins mode on its own isn’t especially fruitful since it functions the same way as the base game. The main addition is the Scatter Coin. This symbol sometimes appears and will grant the player extra free spins and an increasing multiplier that is active for the rest of the mode.

Although it theoretically has no limit, I found these coins to only show up occasionally which meant that most free spin modes would end after about 10 free spins, with a 5x multiplier active for me. Good enough to get some bigger wins but not a guarantee for a major win.

The Paying Piano Club was, to me, mostly a visual slot. The graphics are great with all the different characters animated in their own ways. The musicians play their songs, the Wild is a guest who sips from her margarita and so on. Even the background plays its part in setting the mood.

I wasn’t a huge fan of the small playing field and the limited number of win lines, but they all balance out. My funds would trend downwards somewhat but it wasn’t a free fall and some of the free spins mode activations did help me get a bigger win.

If you don’t mind only a small number of paylines and high volatility, The Paying Piano Club might be something to try out. There aren’t a lot of features but the ones that are there work well and activate often enough to feel like part of the game. The jackpot is also big enough to justify spending a fair number of spins here.

Browse casinos with The Paying Piano Club and other slots from Play'n GO. Create an account and try the game for free before making a deposit.

You can play The Paying Piano Club in English, Finnish, Swedish, German and 30 other languages. 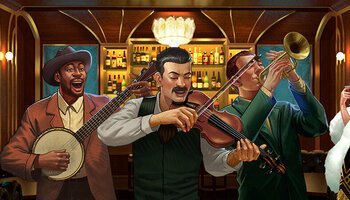