The Phantom’s Curse takes the famous Phantom of the Opera and uses it as inspiration for a feature and prize-filled slot. I’m ready to see if the Phantom can find me!

This slot was created by developer NetEnt in 2018 in a deal with Universal Studios, who at the time were thinking about creating a Universal Monsters series. This slot is built out of a 5-reel, 4-row playing field with 40 paylines. I think the almost standard approach to slots works well here since it gives more room for the symbols and features.

The game is firmly set inside the Opera which it shows through the beautifully drawn background, showing us the opulent main hall. The different symbols are designed to fit the theme, even the standard card suits.

Movie and literature monsters are of course a popular topic for many slots. If you like the theme of The Phantom’s Curse I would suggest slots like Halloween by WMS, NetEnt’s own Frankenstein and The Mummy by Playtech. All of these have adopted the original story in their own way.

As I’ve come to expect from NetEnt slots, The Phantom’s Curse is amplified by a suiting, bombastic soundtrack. There is sufficiently gloomy background music playing while the reels spin and when getting a big win the song picks up a notch.

People who read my reviews regularly know by now that I don’t have much love for the ‘classic’ slot symbols: the card suits, high cards and fruit symbols. I don’t think it’s too much to ask for a slot developer to come up with another 5 or 6 original symbols that better fit the theme of the slot!

Unfortunately, the creators of The Phantom’s Curse did not agree and decided to fill up their list of symbols with the usual card suits. From highest to lowest the symbols are:

I’m always disappointed when a game doesn’t go all-out on creating original symbols. That said, it does incorporate beautiful symbols, even the card suits, that were adapted to fit the setting as close as possible. If you know the actual story of the Phantom of the Opera the higher-paying symbols will make a bit more sense.

There are a series of features incorporated in The Phantom’s Curse that help to liven up the game. They aren’t too complicated although I did think the way the game communicates how they work leaves something to be desired. It sounded a lot more complicated than it was.

The standard features don’t require too much explanation I think. The way it counts paylines from both sides is nice but I didn’t see it trigger exceptionally often. Meanwhile, the other features spice up the game quite a bit.

The main feature during the base game is the Sticky Re-Spin Wilds, which appear when a Stacked Phantom symbol appears on reel 1 and a Stacked Masked symbol on reel 5. This will make these symbols sticky, make them count as wilds and trigger an automatic re-spin. In my experience, it hardly ever resulted in a win but it’s of course possible.

Get 3 Scatter Symbols on the screen at the same time to start the Free Spins mode. This will transfer to a filled opera with a chandelier on the side of the screen, connected with 5 ropes to the 5 reels. If you get a Masked Phantom symbol on a reel, the rope connected to that reel will be severed. Once all 5 ropes are severed the free spins mode ends.

This does mean the free spins mode has no set number of free spins, it can continue for a long time if you don’t get a Masked Phantom symbol on each reel! In my experience, this mode would naturally end after about 10 free spins.

Finally, getting a Stacked Phantom symbol on reel 1 and a Stacked Christine symbol on reel 5 will start the Pick and Click Bonus Game. Here, you’ll find Christine in her dressing room looking at a series of hand mirrors. As the player, we’re allowed to pick these mirrors, uncovering a coin reward or a cross. Once a cross is selected, this part of the game ends. Next, Christine looks at three large mirrors. Picking one will give your coin win a 1x, 2x or 3x multiplier. After that, you return to the base game.

The Phantom’s Curse is a slot with a lot of ideas but unfortunately misses some steps to make it stand out more than it does. It has a large number of animations, including special intro movies for every bonus game, while also keeping the different symbols lively. Unfortunately, they took some shortcuts when it came to the symbols but that’s obviously forgivable.

NetEnt has shown itself to be quite capable of making slots based on intellectual properties and I can’t say they failed with The Phantom’s Curse. It is a strong, expertly made slot that unfortunately kind of loses itself in the features and a lack of personality.

The game has the usual features you expect from professional slots, including Autoplay and Quick Spin. With Low Volatility you can expect regular smaller wins, which can be modified a little by adjusting the bet per spin between £0.20 and £200 per spin. A max. win of 800x your bet is acceptable but doesn’t stand out.

If you’re looking for a slot that incorporates a lot of different features, looks and sounds amazing and is easy to get into, this game is for you. People who are looking for either something more original or closer to the classic format will probably not enjoy it as much.

Play The Phantom’s Curse for free

Browse casinos with The Phantom’s Curse and other slots from NetEnt. Create an account and try the game for free before making a deposit.

You can play The Phantom’s Curse in English, Finnish, Swedish, German and 20 other languages. 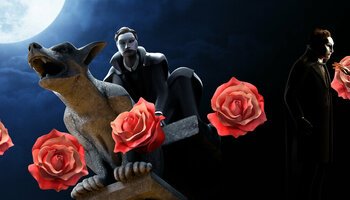