In a sleek twist of words, one of the most memorable films in history has been made into an online slot called The Slotfather Part II.

There couldn't be a better-fitting title for a game about fashionable Italian-American gentlemen, their extended ‘Famiglia’ and favourite pastimes.

Much in the style of Betsoft’s top games, the title at hand has been furnished with three rows and five reels. Playing Slotfather Part II was fun thanks to the awesome graphic design and because the 3x5 layout spins across 243 ways to win.

This kind of setup is my cup of tea (or grappa) especially because there are three symbols that can land three-rows high. The latter are the lesser Dons of a syndicate and they have their fingers mixed in two of the bonuses on The Slotfather Part II.

I made sure not to be won over just by the cool graphics and the smooth Speakeasy tune, so I checked out the max win potential. The magical number that players can win from a single spin is a stunning 1,693,500 coins times your payline bet, so there is definitely that factor to consider for those who haven’t decided whether or not to play the game.

The theme is indubitably an echo of the 1950s America, precisely the parts that were steeped in the vivacious clamour of Sicilian emigrants. Betsoft has grasped perfectly the appearance of the mafia Dons and their henchmen and the things they held in high esteem, like cleavers (for the veal parmigiana of course), cigars, poker, wads of cash, etc.

All of these have been drawn and rendered to perfection, even the mafioso holding a Thompson gun. My favourite part of the design, however, is the musical score. Oh, I've enjoyed it too much. There is a recurring tune of mandolins and a piano that reaches a higher high when the trumpets come in as you are spinning the reels. A+ I'd say in this regard, so much so that I wish I could own this track for my listening pleasure anytime.

In terms of features, this game has it all - a Wild, free spins bonus, instant cash prizes, respins and even a special bonus feature.

This bonus is triggered with three, four or five scatter symbols (blue truck) which is equal to 8, 12 and 20 free spins and a cash prize of 3x, 5x and 10x your bet in that order. Even if you land two blue trucks anywhere on the screen, The Slotfather Part II will pay you 2x your bet for being a trusty courier. Also, if another three or more trucks stop on the reels, you can get another round of free spins.

I guess this feature is to say loyalty goes a long way in the family. Playing the game may award you the free spins bonus and by that extension, the game awards you an instant cash win at the end of it.

The gangster's icons can land in partial or full view. If the latter is evident and there are two or more matching symbols, The Slotfather Part II rewards you with a respin which gives you a chance to land a cash prize plus the feature below.

As I said, three gangster symbols of the same kind (Frankie, Fat Tony or Snake Eyes Sammy) can take you to a table where you get to make a deal. The Don presents you with six folders that can contain a cash prize or the message "Collect". Each time you miss the "Collect" folder you win a prize and these can amass before you finally chance on the folder that brings you back to the base game.

There is further detail to this bonus feature, which I find to be quite amusing. Betsoft has equipped each gangster with a specific variance level. Fat Tony is low variance, so the prizes tend to be smaller but more numerous. Frankie is the high variance symbol that pays rarely but pays well. Finally, Sammy is the medium variance mode that can go either way for you.

In my experience with the game, I've played it long enough to get all of its features to trigger. The free spins bonus is quite alright. I can sense a slight improvement in the odds, so you are not left with just a petty win. On the other hand, I've had the Gangster Feature trigger with each of the characters. Fat Tony indeed pays frequent but small amounts. Sadly, I never caught Frankie Knuckles in a good mood.

I said I liked the 243 ways to win payout system better compared to standard paylines because, for this game, Betsoft has done it quite well.

Per the usual, winning outcomes can form left to right by matching symbols landing on adjacent reels, regardless of the position on the row.

For a game that can theoretically pay more than 1,500,000 coins, the smallest bet of 25p per spin sounds to me like a reasonable amount. You can set the game to £1 or more but there are high-stakes amounts available too.

The aspect of The Slotfather Part II that I didn't find too amusing is the payout structure. There are a total of nine paying symbols whose values fail to impress because you can make back your full bet by landing five symbols in the low-paying category or four in the high-paying category.

This is a breakdown of the potential payouts for each of the symbols:

In my opinion, there are two sides to the game - the super-fun extra features and the mediocre base game. I say ‘mediocre’ because the payouts are just too low to make it worthwhile, so right at the get-go, if you decide to play The Slotfather Part II it is going to be because of the extra features. I should add, the Double Up option lets you take a crack at the small payouts by trying to make them double in a game of heads or tails.

Slotfather Part II has a theoretical return to player of 96.60%, which I find to be quite decent. Overall, the game has made a name for itself in the world of online slots and is deserving of a few dozen spins.

Browse casinos with The Slotfather Part II and other slots from Betsoft. Create an account and try the game for free before making a deposit.

You can play The Slotfather Part II in English, Finnish, Swedish, German and 22 other languages. 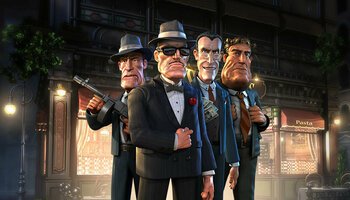