You know The Slotfather is going to be a good game when there’s such great wordplay at work. This 5-reel, 3-row slot with 30 paylines uses The Godfather theme and draws from imagery relating to the Italian Mafia.

The result is quite fun. All features are cleverly executed using these mafia elements. And whenever a decent win is registered The Slotfather will give you a few words of encouragement. What made me giggle is that he sounded a lot like Donald Trump, so the FX are really on point.

The slot is on the older side as it was developed back in 2009. You can certainly get a feel for this as it not as polished as the newer slots are. However, with such an interesting theme and with so many features, I can see how this slot is still a firm favourite.

All those things you might think of when you think of The Godfather are featured in this slot.

Since the game has 30 paylines we had these active when calculating the payouts. The symbols, from highest to the lowest consist of:

Three or more of these on an active payline will start the bonus round. Get 5 of these on a payline and you will win the jackpot prize (but this is not available in the free spins round).

The Fat Gangster is the underboss and apart from paying 10x with 5-of-a-kind on a payline he also triggers the underboss scatter. Get 3 or more fat gangster tiles anywhere on the reels and the tile will turn into a wild.

With 3 or more Mafia boss tiles on an active payline, the bonus round is triggered. You will need to prove your worth to the Slotfather himself and prove you are a good earner. In the bonus round, you will have to choose 3 locations from the 8 available where the boss should put his slots. Place these well, head back to the boss and there will be a good payout for you as well.

On reels 1, 2 and 3, if the Sneaky Gangster appears alongside the briefcase you will instantly be awarded a win.

When the Old Gangster appears on either side of the Tommy gun on reels 1, 2 and 3 the Mob Free Spins round will start. A selection of bullet holes hides the number of free spins and multipliers active.

With so many features active there’s quite a lot to discover when playing this slot. However, I did find that many of the wins were on the low side. The slot’s RTP is on the low side at 95.69% and with its medium variance, it might take some time to get a win you’re truly impressed by.

Having said that, even though wins on the main game were meagre, I did find myself getting wins around the 7x mark from all the features. My biggest win on the slot stood at a low 19x with the Mob Free Spins feature which is on the disappointing side.

So the engine might be more suited to casual players rather than those chasing maximum wins and high risks. But, notwithstanding its age, this slot is still capable of being entertaining, in that retro arcade sort of way.

Play The Slotfather for free

Browse casinos with The Slotfather and other slots from Betsoft. Create an account and try the game for free before making a deposit.

You can play The Slotfather in English, Finnish, Swedish, German and 22 other languages. 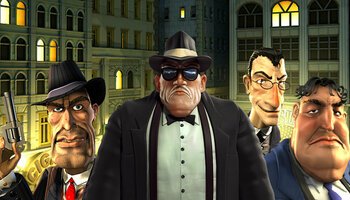