Being a Tipsy Tourist on the beach sounds like a fun way to spend your vacation. The crux of the story is that a regular guy named Gary is living the life by night and curing his hangover on the beach by day - with more drinks. The premise is a bit unusual, but the game can provide slot players with a little bit of fun on the reels and potential winnings.

Upon my first impression, The Tipsy Tourist strikes me with its whimsical appearance. You can feel a tropical island vibe as the game is drenched in bright colours. On the other hand, a typical 3x5 layout keeps the gameplay at ground level. I would have wished to see a more radical solution for the reel set, but I guess imagination didn't run wild in Betsoft's studio for this game.

The only thing that resonated with me was the symbol of an aeroplane ticket to Miami. This was my wishful thinking inspired by The Tipsy Tourist. Everything else, I've already seen on other Betsoft games, like Paco and the Popping Peppers or, even better, the Mr Vegas slot.

There are still a few good things that I can take away, but sadly, the graphic design isn’t one of them.

Every working person on the planet needs a vacation where they can let their conscious self go AWOL and the sense of moderation haywire. Gary seems to be in that kind of a mood, but Betsoft didn’t create a set of symbols that are eventful enough to reflect his escapades. Needless to say, I think the graphic design could have been so much more than this.

The clunky graphics aren’t helping either. I tried to get into the game, but couldn’t get past the silly animations. Arguably, the soundtrack can succeed in creating a sense of being at a tropical beach party, but that’s as far as the game can take you. Don’t skip The Tipsy Tourist just yet, because its extra features may be worthy of redeeming the above.

The game has a standard Wild symbol that can substitute for any of the regular symbols. In addition to it, there is one symbol for the free spins bonus and one for the minigame.

Another feature is the card colour guessing game, prompted on the screen as Double Up. You can choose to play it at will following any winning outcome, for a chance to double that prize.

The beach ball scatter symbol can land on reels three, four and five. You need three to trigger an eight free spin bonus. The game can retrigger and increase your chances of adding more Wilds on the screen. This is the only thing that I can say is positive about The Tipsy Tourist. The Wilds are sticky during the bonus and getting two or more in the 'right' place - that is, to the left of the third reel, can be a very good thing.

Three red cups filled with beer is your ticket to the drinking table. Pitted against the comely lady from the paytable, your job is to call the side of the coin. Gary takes a drink for every good guess. You can win a moderate amount in credits if you can have four or more drinking rounds during that sitting. Otherwise, the drinking game is just plain bad and brings very little excitement to the gameplay.

The Tipsy Tourist doesn't have the most exciting paytable. In fact, for the most part, I find it to be the very opposite of that. Payouts are exceptionally low for three-symbol wins and even for the lower half of four-symbol combinations.

On the other hand, I can agree that the game is rather generous with the frequency of winning outcomes. The theoretical Return to Player is 97.10% - quite solid in my opinion, and the volatility is high.

The combination of specifications above transpires in small payouts that come at a narrow frequency and medium to big wins that aren't exceedingly sparse either.

A couple of bright points in this regard are the potential payouts for the two highest-paying symbols, which can range between 3x and 17.5x your bet.

The list of payouts is as follows, expressed in credit multipliers by your payline stake:

I’d hate to give The Tipsy Tourist low marks. Only if I can get past the fact that the graphics are of such a low-quality compared to so many other Betsoft games from the same period. Mr Vegas is one example of how this game should have been done.

The thing that can redeem the bad graphics is the RTP percentage and the payout frequency. I’ve noticed that The Tipsy Tourist tends to go into spells where it can provide multiple payouts and then it recedes back to low-symbol wins. I’d say, give the game a try if you like to entertain yourself with low to medium payouts.

Play The Tipsy Tourist for free

Browse casinos with The Tipsy Tourist and other slots from Betsoft. Create an account and try the game for free before making a deposit.

You can play The Tipsy Tourist in English, Finnish, Swedish, German and 22 other languages. 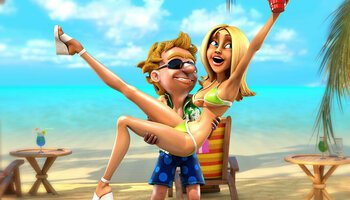