The Vampires is a game that takes the centuries of folklore and fiction about these dangerous creatures of the night and lets you play with them! You’ll find Multipliers, a bonus game and free spins in this bloodsucking game.

The game was created by relatively small developer Endorphina who released The Vampires in 2014. Even though the game is getting up there in years, it does have some excellent graphics and different animations that bring everything to life. The game is seemingly set in a creepy castle as we look out of the window, seeing the 5-reel, 3-row playing field projected onto the glass.

There are a number of animations playing during the base game, with the symbols all being animated when they’re part of a win. These animations can include blood rippling, a vampire biting someone’s neck or one baring their teeth. I thought it showed the developers went above and beyond what regular slots during that time incorporated.

The music was unfortunately almost non-existent. The only sound playing during the base game were little thumps when the reels spun. Getting a win would play a brief jingle that didn’t really feel like it belonged in a vampire game. When the Free Spins mode triggered it would also just play a short jingle that felt like it belonged to a normal slot, not one based around vampires.

All the symbols in The Vampires are unique and made to fit the setting. They all look good even though they might not have the same sharpness that newer slots have. Still, I really appreciated the creativity and the time it must have taken to create them. The animations for all of them when they were part of a win just added onto that.

The game has a low volatility thanks to the relatively small number of symbols. The wins are shown on screen with the 25 paylines showing, as well as giving the total coin value shown. Players can choose a bet between £0.01 and £250 per spin. I found that the game would trend upwards as the bonus game and free spins mode triggered often, but caution is always advised.

Since the volatility of the slot is low, wins also don’t pay out a lot. However, I found that plenty of times a win would incorporate more than 1 payline which would increase the total win. Also, the different special features activated often and they could facilitate big wins.

The Vampires does not boast a lot of features but the ones that are included do appear frequently. The features are:

The features included in this slot are not likely to be a surprise to any but the most inexperienced players. I did notice that all the features trigger regularly with the bonus game being the most common. The Wilds often facilitated wins but weren’t part of a Wilds-only payline very often. That’s where the big wins would come from, as you can see on the paytable above.

The Bonus Game brings the player to a graveyard where they’re presented with 12 gravestones. The player picks a grave to pour blood onto. If there is a vampire hidden inside, they reach their claw through the soil and grant a coin win.

I thought the bonus game was a fun little aside from the base game. It triggers a lot in my experience, but it is also volatile in terms of wins. Sometimes I would instantly click on an empty grave and be sent back to the base game. Since it activates so often, this isn’t a disaster.

The other main feature is the free spins mode. This one triggers less frequently but still enough to feel like it’s part of the slot. When the player gets 3 Scatter Symbols on the screen, the mode starts. Players receive 10 free spins and all wins during this time have a 3x multiplier applied to them.

The rest of the free spins mode plays exactly the same as the regular game. It is not more likely to get a win or to get bigger wins. The only thing that’s really different is the multiplier. I thought it was a nice addition to the game but it was frequently less of a source of coins than the bonus game.

All in all, The Vampires is an impressive effort made by a smaller studio. The game has stayed relevant over the years thanks to its quickfire gameplay and low volatility. The slot is clearly defined by the setting and theme, and everything in the game is built around enforcing this.

I always like original symbols and the fact that each of them is animated is the cherry on top. The sound-design missed a few beats and was actually underwhelming. Still, as someone who usually plays with the sound muted anyway, this wasn’t a big deal to me.

If you’re looking for a slot that offers high-risk high reward I don’t think The Vampires will offer that. The max. win of 7,500x your bet is very enticing but at the same time never felt very likely. Players can increase the size of their bets to create that thrill to their liking.

Play The Vampires for free

Browse casinos with The Vampires and other slots from Endorphina. Create an account and try the game for free before making a deposit.

You can play The Vampires in English 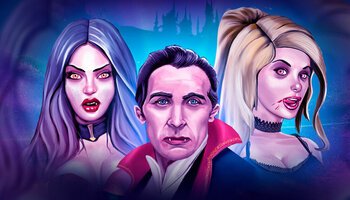