The Wild Hatter is a volatile game with wonderful wilds. Hop through the looking glass and meet Hatter in Wonderland.

Johnny Depp’s Hatter Tarrant Hightopp, or the Mad Hatter as he is better known, stars in Red Tiger’s The Wild Hatter slot. It may not be the actual likeness of Depp, but it’s close enough.

The game is set in Wonderland, though we don’t see many other characters other than Hatter. The settings at least look great and look a lot like the Wonderland we got to see in Tim Burton’s films.

So then, what is The Wild Hatter? It is a five-reel slot with four rows and 30 paylines. The game has high volatility and wild gameplay, which all culminates in the Hatter symbol. He is a wild, but also the start of a possibly wondrous special feature. You get locked symbols, respins and multipliers, all in one wild feature.

The Wild Hatter is based on Tim Burton’s Alice in Wonderland films, and especially Alice Through the Looking Glass. The visuals are generally well done and the game looks the part.

The slot takes place just outside the gates of Red Queen’s castle. You can see the strange wilderness creeping up from behind and the perfectly cut grass just on the other side of the fence. Just don’t go losing your head in there.

The game takes a lot from the source material, but I feel like it wasn’t enough. Everything outside the reels is perfect, but the symbols are dull. The developers had a lot of options and crazy creatures, but chose not to use any of them. Sure, the game is easy to read, but this should be Wonderland.

That being said, the visuals are the better half of the game. The music and sounds are surprisingly timid. There are some delightfully whimsical aspects there, but they just don’t go far enough. Red Tiger didn’t want to take any risks and it shows. As I said, this is Wonderland, not some generic fantasy setting.

When I first saw the symbols, I was extremely disappointed. This is the one game where you could easily have thematic card symbols and numbers, but they didn’t take the opportunity. Why on earth wouldn’t you use card soldiers when you have the chance.

What we got was just five number symbols, plain and simple. Nothing thematic, just ornate numbers. The five high-tier symbols have at least something to do with the theme. We get a knight chess piece, a pot of tea, a top hat, a pocket watch and the Cheshire Cat. Hatter himself is the wild and the only special symbol.

That wild symbol is the best symbol in the game and the one you want to see as often as possible. It activates the Wild Hatter special feature, which has sticky respins and multipliers.

The Wild Hatter feature is the way to win in this game. The more times you can activate it, the better chances you have of coming on top. Luckily, the feature does activate fairly often, so you actually have a chance of winning.

There was one thing that annoyed me here and that was the paytable. The wins are listed as relative numbers and not what you actually would win. For example, three aces are always listed as 9, which actually means that you win your total bet divided by the number of paylines times 9. This is just obtuse, as the player can’t even change the number paylines.

Hatter is the best symbol in the game and when he shows up, it’s time to play. Hatter chooses a random symbol, locks them all and starts your respins. This is where you can win big.

Hatter respins the rest of the symbols and tries to find you more. If you get at least one more, those are locked in place, your multiplier increases by one and you get a new respin. This is done until you don’t get any new symbols of that kind or the screen is already full.

Getting more wilds during the respins is even better. They are locked in place as well and also upgrade your locked symbols. The new Hatter will change every locked symbol to a random higher-valued symbol. You then continue the respins trying to collect more of those better symbols.

Red Tiger did a good job with The Wild Hatter slot. It may not be wonderfully spectacular, but it’s a solid slot.

When you have a game like this, the visuals need to be top-notch. The films it is based upon are visual spectacles, so the same will be expected from the game. The slot does look nice, but it could have gone even further. It is about Wonderland, so fill the game with wonder.

The game itself is fine and I do like the Wild Hatter feature, but once again, I would have wanted to see a bit more. Especially when this isn’t really that innovative feature. Maybe throw in a random bonus in there or something to liven it up.

In the end, I did like the game. It could have been a lot more but as it is, it’s fine. The game gives you a nice taste of Wonderland, but doesn’t completely fill you up.

Play The Wild Hatter for free

Browse casinos with The Wild Hatter and other slots from Red Tiger. Create an account and try the game for free before making a deposit.

You can play The Wild Hatter in English, Finnish, Swedish, German and 18 other languages. 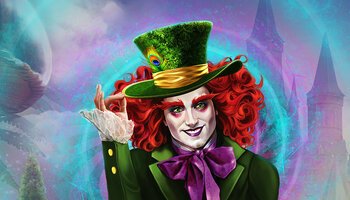