Walk into an enchanted forest where you will have a chance to meet The Wiz. This gorgeous game, produced by Elk Studios is a 5-reel, 4-row slot with 178 ways to win.

The magic and dragons theme has been done over and over by the many slot providers. However, in The Wiz, all aspects of the slot have been done perfectly. From the captivating music to the alluring designs, to the animations, every detail in the game will transport you into a mystical world.

Beautiful doesn’t even start to describe the intricacy of every symbol designed in this game. You can tell special attention was given to the more important symbols of The Wiz and The Dragon. There’s a realism to them that is uncanny.

Every time a win is registered a beautiful animation that looks like an ethereal firework will cross through the winning symbol. I’m normally not a fan of these animations, especially when the win is under the bet amount, but here it’s so subtle, it works well with the theme.

Between 2 and 5 scatter symbols will trigger The Wiz Spins round. A total of 10 spins are awarded with 5 scatters, 7 spins with 4, 5 spins with 3 and 1 spin with 2 scatters.

When the bonus round starts all lower-paying symbols will magically transform into their higher-paying equivalent. Whenever a dragon appears on the reels The Wiz Spins are frozen and the Walking Wilds respin feature is started.

During the bonus round the Red Dragon is your friends. Apart from acting as a multiplier wild, the dragon will trigger respins as it walks from right to left on the reels. Every spin, the dragon will walk one position to the left keeping its multiplier. If other dragons appear the respins will continue until all dragons have left the reels. This can create some jawdropping wins. In one round, when I entered the bonus round with just 1 Wiz Spin, the dragon kept appearing on the reels. In the end, I won 280x worth.

The Wiz is a beautifully designed slot that transports the player into a mystical world of wizards, potions and dragons. It’s been a while since I fell in love with a game, but The Wiz captured my heart. It might be the beautiful graphics or the captivating soundtrack that did it. But I have to say I’m also a fan of all the features.

Whilst its variance is set to medium, I did find the game slightly volatile at times. There were moments where I went a long way before I registered a win to then enter the bonus round and only win 10x.

However, on another 2 occasions I entered the bonus round I did so with 5 scatter symbols, which mean 10 spins. On the first occasion, I got a win of 100x. But on the second I kept receiving dragon respins which ultimately resulted in a win over 260x. So I would say the volatility is between medium and high.

There is something truly special about this game. Kudos goes to Elk Studios for creating such a masterpiece. I will keep an eye out for their games in the future as they aren’t only visually stunning but also fun to play.

Play The Wiz for free

Browse casinos with The Wiz and other slots from Elk. Create an account and try the game for free before making a deposit.

You can play The Wiz in English, Finnish, Swedish, German and 19 other languages. 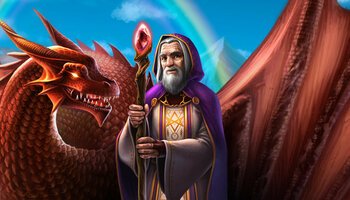