The Wolf’s Bane is a story about a terrible curse plaguing a small village in the 1700s. This time though, the story’s a bit different - because it’s you terrorising the poor people!

In NetEnt’s 2019 release you have fallen the victim of a curse. You feel your skin tingling in the moonlight, sudden urges to eat raw meat and chase your own tail. When the waxy moon shines full, all your neighbours start to look quite delicious… You are a werewolf, always hungry and always thirsty for blood. Leading a group of wolves you hunt the villagers and try to avoid the hunter, who’s vowed to end the curse once and for all.

The Wolf’s Bane is a low volatile game with RTP of 96.74%. Because of the level of volatility, the slot doesn’t have a grand maximum win, but theoretically, it should pay more evenly than slots with high volatility.

For a horror fan, this slot is a must-try, but I would personally recommend to play it with play money first instead of real currency.

The Wolf’s Bane reminds me of the time when I was in third or fourth grade in school and somehow I got a book called “Usborne guide to the supernatural world” in my hands. It had stories and illustrations about ghosts, poltergeists and werewolves, among many other mysterious things. And something in the art style greatly resembles the book which creeped me out - but in a good way.

The reels in the slot are transparent, so the atmospheric background is always visible. There’s a tavern with torches on its walls, a big, yellow moon and dead-looking trees with their bare branches waving in the night.

I don’t even exaggerate when I tell that the general ambience of The Wolf’s Bane, the music and all, made me get goosebumps. I strongly suggest trying this slot while wearing headphones.

The Wolf’s Bane is a slot game with five reels, three rows and ten paylines going from left to right. The winning symbols are required to land on adjacent reels, starting from the leftmost reel. The Scatters are an exception and landing three of them anywhere triggers 10 free spins.

The symbols presenting the villagers are the best paying ones. The most valuable symbols are the wounded soldier and Wild, which both pay 50 times your bet if landing 5 of them on a single payline. Theoretically, the biggest payouts can be won from the free spins with either multiplier Wilds or expanding Wilds.

One Wild is automatically added to reels 1, 2 or 3 at the beginning of each spin. The free spins can be retriggered by landing three or more Scatters.

The Pick and Click bonus is a simple feature, whereby landing three Bonus symbols you get to pick one of them and reveal the coin reward. The reward can be anything from 5 to 50 times your bet.

Personally, I think this slot was released a few years too late for it to become a hit. It doesn’t really offer anything new or innovative as the features are quite worn. I like the random Wild during the free spins, but sometimes it’s also unreasonably hard to trigger the said feature.

I played this slot around 200 rounds before triggering the free spins and before that happened, my biggest win was 6x my bet. So, not a great experience for the base game.

As a fan of horror, I do like the ambience and the art of the game. It’s actually quite scary! But, the constant howling of the wolves got annoying after a while. I do wish NetEnt would have added an option to turn off just the game effect sounds.

I probably will not play this game, unless I want an easy slot to play with bonus money. Should it have had more interesting gameplay or features, things could be different.

Play The Wolf’s Bane for free

Browse casinos with The Wolf’s Bane and other slots from NetEnt. Create an account and try the game for free before making a deposit.

You can play The Wolf’s Bane in English, Finnish, Swedish, German and 20 other languages. 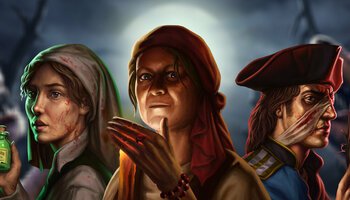