Thor’s Vengeance is about the Norse god Thor who seeks vengeance for some non-specified slight against him. Follow him as he uses his powers over thunder and lightning while the game applies free spins, cascading reels and consecutive wins.

This game was developed by Red Tiger and released in 2021, giving us a clear look at how the studio’s most modern games look and play. The slot has some interesting features as well as a clear but simple look. The game is built around a roughly 6-reel, 4-row playing field but with the top 2 tiles on reels 3 and 4 hidden away. As a result, the game has a rather unique number of 2,304 paylines.

As the game is set using Nordic mythology a lot of its design is aimed at portraying that. To do this, the slot mostly uses different symbols and runes that are at least reminiscent of the time period. There are some abstract faces and animals that fit the style as well. You can even find the usual card suits among the symbols but they are made to blend in with the theme too.

When it comes to the sound, the designers stuck with rather generic music. It’s suitably bombastic for a story about godly warriors but it doesn’t really fit with the Nordic theme. There are also a number of sound effects that sound rather generic, including the effects for wins and the usual sprinkle of coins.

Thor’s Vengeance uses symbols that fit the setting somewhat by keeping them rather abstract. The low-paying card suits are turned into what can be mistaken for runes, while the higher-paying symbols are a combination of abstract animals and faces, as well as Yggdrasil the world tree. Since these symbols are all rather static, they aren’t animated in any special way.

Because the game makes use of a cascading reels mechanic, the only real animation you’ll see is that winning tiles are lit up by crackling electricity before crumbling away to make room for new symbols. Thanks to this mechanic, as well as a large number of different symbols and the low payouts the game comes with High Volatility.

If you are a player that prefers to play it a little safer, or on the other hand you want to go for the bigger wins, you are able to choose a bet between £0.10 and £10 per spin. Although that’s a smaller choice than most other developers offer, it’s pretty common for Red Tiger to limit the size of the bets. The maximum win meanwhile is a comfortable 5,249x your bet, which is average for a slot with this volatility.

Thor’s Vengeance is a largely average slot when it comes to its features and gameplay. Even though it includes cascading reels and consecutive wins, I feel like this has become so common that it can’t really be considered unique anymore.

First a quick look at the features included in the game:

Most of the gameplay features can activate randomly during the base game but that doesn’t happen very often. This made it feel to me that the game was making it intentionally harder to get a win, which wasn’t necessarily fun. During the free spins mode, it is more likely for these features to activate but still not a guarantee.

Getting the free spins mode to trigger wasn’t very easy and I only saw it happen a handful of times during my time playing. That’s too bad since it feels like this mode is required to win anything more than small wins. The multiplier that is active during this mode can really increase the size of the wins, but it’s dependent on previous wins. As such, the free spins mode can run out of spins before the multiplier has sufficiently grown.

Thor’s Vengeance is a good-looking slot that is still somewhat bland. The runes and symbols have been used in other slots before and the game does little to add to those ideas. Having Thor interact with the game through his powers is entertaining but doesn’t happen often enough and it’s not given a lot of attention through the use of graphics or sound.

The gameplay is solid while also quite underwhelming. Players who have some experience with other slots won’t really find a lot here to impress them, and even when it comes to the usefulness of the features it’s a bit lacking. During my time playing my funds did manage to stay quite steady.

I think the game offers some good gameplay and I had a nice time playing it but at the same time, it didn’t leave any permanent impression. I doubt I’d be able to remember this game six months down the line, but as an occasional slot, it does its thing well.

Browse casinos with Thor's Vengeance and other slots from Red Tiger. Create an account and try the game for free before making a deposit.

You can play Thor's Vengeance in English, Finnish, Swedish, German and 23 other languages. 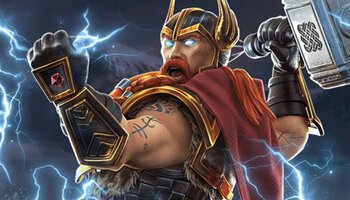