Three Musketeers draws inspiration from the famous novel, using the three characters from the story as a means to activate different features. These range from Coin offers to a stroll through an inn.

When Red Tiger released this slot in 2017, the game might have already looked slightly dated but the level of animations and the number of features make up for a lot. Not that the graphics are necessarily bad but they look flat and rather uninspired. Still, the three musketeers each have a distinct character as well as their own colour-scheme.

The game is built around a 5-reel, 4-row playing field with a nice 40 paylines. The symbols looked very basic, with only a little detail on the high-paying symbols while the low-paying symbols were rudimentary card suits without any original elements. Considering that the bonus features have a lot of detail and animations in them, I think it’s easy to see where all the time went into.

I thought the music was a little too generic to really fit in with the theme of the slot, but the quality was fine. Overall it reminded me of the graphics, not very detailed but there were a lot of unique tunes and songs during the various different features. The amount of work that had to be put in this was actually quite impressive.

The symbols in Three Musketeers are extremely basic, even though the original symbols don’t look half bad. It’s just all done without the attention to detail other visual slots have. Still, the colour schemes and shapes make it clear what each symbol is, as well as making it obvious if there is a win.

The game doesn’t have too many different symbols, but the 3 unique Musketeer symbols do mess with paylines sometimes. As a result, there is Medium Volatility assigned to the game which roughly fit my experience. I did notice a downward trend as I played for a longer time, the bigger wins not making up for the coins I spent in between. Obviously, this can be different every time.

These show up pretty often, frequently helping in triggering a win. They can also appear randomly when a sword slashes across the screen, adding Wilds where it cut the tiles.

The other features are hidden behind the 3 Musketeers. All of them are listed to the right of the playing field with a bar underneath them. Whenever a Musketeer symbol shows up, it will fill up the bar a random amount. Once one Musketeer has a completely filled up bar, their feature activates. The 3 features are:

The mechanic these features work with is pretty sturdy, requiring a specific coloured Musketeer to appear to fill up the respective bar. I found that it usually took a few dozen spins to fill up one bar, while the other bars were also getting filled up. It can happen that 2 features trigger right after another, but sometimes they were more spaced out.

The way the Musketeer moves through the room is to pick a direction, but this is done randomly. Each move, the player picks out of 3 symbols before it is revealed which direction they move in. The movement is not in a straight line but can often involve looping back or moving sideways. If the Musketeer hits a multiplier in a corner, that multiplier is awarded and the game ends. If the doorway is reached, the next room is entered.

I thought the concept is fine but the movement is very slow and it can take several minutes if the player makes good picks and reaches the last room. Then again, the maximum bonus is a good incentive to try it.

The Wheel Bonus brings the player to a windmill. Pressing play will have the Musketeer spin the windmill and randomly stop it on a multiplier. The highest multiplier here is 888x your bet but it is possible to get a higher win since the smaller multipliers allow a re-spin. At this point, the multipliers are added together before awarding the win. I think this is also the feature where a player can win the max. win of 1,900x your bet.

The last feature is the simplest. The Offer Bonus puts us at a table with the Green Musketeer sitting opposite us, presenting us a scroll with a flat coin win. This can be either rejected or accepted. When accepted, the coin win is awarded instantly before being returned to the base game. If rejected, the Musketeer will make another offer. This can be higher or lower than the original offer. The player can reject it again, but doing so will make them automatically accept the last offer.

Obviously, this feature is pretty nice. You will get a random win, usually between 20x and 40x your bet. The trick comes from knowing when to take what you have or risking a bigger win. It has happened to me I ended up with a much lower result by going up to offer 3, which has led me to often just accept the first offer.

Three Musketeers is a slot that would probably be a bigger success if it looked just a little nicer. The graphics make it seem a lot cheaper than it actually is since there are so many animations hidden in the game as well as a tonne of details. The music is similarly simple on the surface but there are so many sound-effects they make the game feel more alive.

I think players that enjoy a more classic experience will want to move on since the game is frequently interrupted by 1 of the 3 bonus games. They are all very different but some of them definitely make the game stop to a halt for a longer time. If you just want to spin some reels, this won’t offer it.

In contrast, players that enjoy modern games will probably have a really good time with this one. The graphics might not measure up to big names like NetEnt and Yggdrasil but the gameplay more than makes up for it.

Browse casinos with Three Musketeers and other slots from Red Tiger. Create an account and try the game for free before making a deposit.

You can play Three Musketeers in English, Finnish, Swedish, German and 18 other languages. 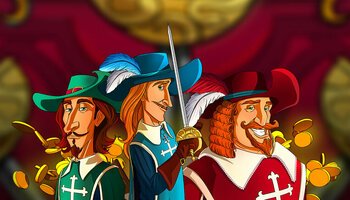