Tiger And Dragon is the story of a clash between a powerful tiger and a fearsome dragon who are both guarding a great treasure. An expanded playing field brings a million paylines and infinite multipliers to the fore.

This slot was developed by Red Rake Gaming and released in 2019, making that year a very productive year for the developer. They expanded their collection of slots with other special slots including Bonnie & Clyde and Knights. With Tiger and Dragon, they tackle Chinese legend and bring it into their stable.

The game is clearly set in China as the background shows the Great Wall, drawn in crisp detail. The reels are filled with different Chinese symbols. The music finished the complete package, resorting to subtle but distinct Chinese instruments that create an oriental theme.

I thought the game looks pretty good considering their unique style. I’m not a huge fan of what RedRake Gaming produces when it comes to the graphics but ironically the 6-reel, 10-row playing field is so big that the symbols have to be tiny and it’s almost impossible to see much detail anyway. Because of the size of the slot, it has a staggering 1,000,000 paylines!

The game is filled with a standard collection of symbols, but that doesn’t mean the entire reel is filled with these symbols. In fact, most of the slot is filled with non-winning symbols that are grey. These symbols fill up a special bar that triggers a roulette mini-game once it’s filled up. More about that later!

As you can tell the amounts you win on a payline are extremely low, and even six-of-a-kind with the 10 or 9 symbols won’t make you your original bet back. The idea is that the reels Avalanche, meaning you can get additional wins with a single spin. That should get you your investment back, as well as occasionally net you a plus.

That brings us to the features of the game. There are quite a few to go over:

The thing that took me the longest to get used to was the fact that this game still works with traditional paylines. Even though 1,000,000 paylines means that you only need to get the same symbol on consecutive reels anywhere on the screen to get a win, the only way to get a win is to get these symbols on consecutive reels from left to right. No clusters, not both ways, the way to win is still practically the same as in a classic slot.

Since there are so many symbols on the screen at the same time, a total of 60, it’s almost impossible to get a good grasp of what’s happening. This left me feeling like the game told me if I had a winning payline but I didn’t feel like I had the time to check.

The non-winning symbols dominate the game and they make it hard to get winning paylines. Even with so many rows, it felt very difficult to get any wins. The game lists a Medium Volatility but that wasn’t my experience at all. It frustrated me quite often, not only with how few normal wins you get but also how difficult it is to get the free spins mode.

The Free Spins mode is advertised in the game as a massive boost to your funds. Getting it to trigger is difficult, requiring at least 5 wins in a single spin which proved to be almost impossible for me. Once you start the Free Spins mode any wins will add to the multiplier. In my experience though, the odds of getting any wins during the free spins mode are the same as during the base game which means it’s likely you’ll spend most your free spins without a single win.

The other major feature is the Roulette mini-game. This bonus game triggers when you have played for long enough to fill the tracker with non-winning symbols. Depending on the size of your bets it gives you a certain money amount. Then, you pick either Dragon (green) or Tiger (blue). A roulette wheel spins with different multipliers on them and coloured either green or blue.

Each spin you pick one of the two colours. Pick correctly and you receive the multiplier and you get to choose again. Choose incorrectly and the game ends, paying out the money times the multiplier you accrued. This can potentially be a huge payoff as the maximum amount of spins is 100. Obviously, that is only if you guess correctly 100 times in a row.

I found this game mode to be an okay addition but considering the ridiculous amount of spins to fill the tracker it wasn’t really worth it. What I also found strange is that the height of your bet has no impact on how fast the tracker fills up. If you bet the minimum amount you’ll only spend a few dozen pounds to fill the tracker while using the maximum amount will require you to spend thousands of pounds. Considering that you could very well pick wrong the first spin in the bonus game, you wouldn’t even get a single multiplier on it. In my opinion, absolutely not worth it to try it with anything other than the lowest bet amount!

Tiger and Dragon fits the assortment of slots that Red Rake Gaming has made so far pretty well. It has the same graphical style and presents its features in a similar way.

If you’re looking for a classic slot experience this isn’t it. The bigger playing field alone was very confusing, mostly because it’s filled with non-winning symbols that have no real value in the game except to make it harder to get a winning payline. The tracker they are used to fill up seems to be used as an excuse for their implementation, even though it plays such a small part in the total game it doesn’t weigh up.

I got increasingly frustrated by playing the game. The Medium Volatility doesn’t hold up to my experience at all, with spin after spin giving no wins and even if there was a win there’d be only 1 or 2. Given the extremely low win numbers even for a six-of-a-kind, it was unlikely to get my investment returned.

The Free Spins mode triggered only twice during my time playing and was worth merely a few times my bet. In other words, it was extremely difficult to get it to drop and when it did it would barely make any money.

The ability to choose a bet between £0.20 and £35 per spin seems a waste of money, especially considering the low payouts and the fact it doesn’t change how fast the bonus game tracker fills out. I didn’t really see any reason to increase my bet size other than to lose my money faster. In contrast, the prospect of a max. win of 1,223x your bet really doesn’t seem proportional.

All in all, the game has some interesting ideas but the implementation was terrible. Obviously, it may vary greatly for other players so if the style of the game appeals to you, you should give it a try. If you keep your bets small I’m sure you can get a good idea of what the slot offers and decide whether or not you want to keep playing!

Play Tiger and Dragon for free

Browse casinos with Tiger and Dragon and other slots from RedRake Gaming. Create an account and try the game for free before making a deposit.

You can play Tiger and Dragon in English, Finnish, Swedish, German and 19 other languages. 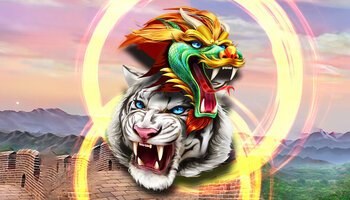