Tiger’s Claw is a slot set in a mythical land which makes use of different special items to conjure spirits and guide the players further along the path. Non-standard reels, stacked wilds and free spins are waiting to be found.

The game was released in 2018 by developer Betsoft, who seem to struggle with giving their slots an appealing appearance. Just like the other 2018 slot Reels of Wealth, Tiger’s Claw suffers from a look that makes it seem years older than it is. The graphics aren’t quite sharp enough and some of the effects used can be found in slots almost a decade older. It’s too bad because I liked the mystic setting.

Tiger’s Claw has non-standard reels, meaning the game doesn’t have the usual rectangular shape. Instead, reels 1 and 5 have 3 rows, reels 2 and 4 have 4 and reel 3 has 5 rows. This usually makes it harder to hit one of the paylines but with 720 paylines that’s less of a concern, and the fact that the game counts paylines both ways means it’s even more likely to get a win.

Unfortunately, it’s not that easy as the game has quite a lot of different symbols which result in a High Volatility. I found Tiger’s Claw to be pretty timid in handing out wins as there would be multiple spins without anything to show for it. Even when there was a win, it was likely only a single payline and not even pay out enough for a single bet. This is something players will need to keep in mind.

The music in this slot is pretty toned down, relying more on subtle sound effects in the background instead. We can hear some soft drums play while the reels spin and wins are celebrated with a brief but louder jingle. It was okay but not very memorable.

The symbols in Tiger’s Claw are big and easy to tell apart, but I didn’t think they were very pretty. Still, they look good enough to fit the mythical, shamanistic setting.

There weren’t a lot of animations in the game, except for drifting snow in the background and the Scatter Symbol moving when it triggers the Free Spins mode. Because of the odd shape of the reels and the Pays Both Ways mechanic, it’s probably for the best.

I found most Betsoft slots to be rather conservative with the number of features and Tiger’s Claw is no different. That’s not to say there aren’t any, it’s just that there aren’t as many as in slots made by other developers.

Most players will probably be familiar with the standard features. The Wilds function as they do in every game, acting as any symbol that will trigger a win. I didn’t find them to appear very frequently, either during the base game or the free spins mode. Sometimes they would appear as Stacked Wilds that would often result in rather substantial wins but this was even rarer.

The non-standard reels will probably turn off players that are looking for a standard slot. Couple that with the Pays Both Ways feature to take some big steps away from the classic gameplay and it will probably only deter more people.

The Free Spins mode is mostly the same as the base game, except for having a new background. I did find this part of the slot to be very lucrative since it’s possible and rather easy to retrigger additional free spins. I would often end up with more than two dozen free spins and they would regularly result in quite a big win.

If you’re a player who doesn’t mind a game with some big steps away from the format but with the core gameplay intact, I would recommend Tiger’s Claw as the features work very well together.

Tiger’s Claw is a slot that seemed to be a generic Asian slot but it was rather deceptive as the mythical setting is noticeably different. It’s unfortunate that Betsoft seems unable or unwilling to really invest a lot of time in the look of their slots as the graphics looked outdated the moment the game was released.

The gameplay was solid but also rather boring. That might be a little surprising, considering the features that alter the core gameplay, but I’ve played enough slots with similar features. Once you get over the change in the system, you’ll notice that the base gameplay is the same.

I did enjoy my time playing Tiger’s Claw even if it was pretty unimpressive and the game looks older than it is. The gameplay is simple enough to be played passively, great when you’re not in the mood to pay attention too much but rather seeing if something good happens.

Players can choose a bet between £0.50 and £25 per spin, which lets them play around with the High Volatility. Meanwhile, a maximum win of 14,400x your bet is substantial enough to entice a lot of players to give this game a try.

Browse casinos with Tiger's Claw and other slots from Betsoft. Create an account and try the game for free before making a deposit.

You can play Tiger's Claw in English, Finnish, Swedish, German and 22 other languages. 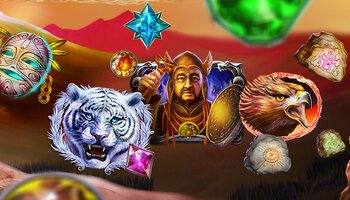