Tiki Fruits brings us to a hot island where the tropical fruits are waiting for us, as well as a massive set of reels that are soaking in the sun. With cascading reels, cluster pays and a bonus feature there is surely enough to enjoy with this game.

This slot was released and developed in 2018 by now-veteran creator Red Tiger. Stepping away from their usual focus on Asian settings, the game brings us to a tropical island where a massive 8-reel, 10-row playing field is waiting for it. As you can imagine, this fills up most of the screen but leaves us enough room for a tiki totem that consists of 2 faces, each of them reacting and emoting as the game progresses.

With such a massive playing field, the game doesn’t play exactly the same as other video slots. Wins are calculated based on clusters of 5 symbols or more, touching horizontally or vertically. Whenever such a cluster exists, the player receives the payout and the symbols involved disappear. The gap is then filled by symbols above it dropping down and the reels being refilled with new symbols.

The game looks great, with the different symbols colourful and distinct from each other. This is an important element for me as it can get quite confusing on the eyes if symbols resemble each other too much. Luckily, the game lets symbols that are part of a cluster bounce and light up before they disappear so the player has a chance to see how much they win.

The Tiki totem is probably the focal point of the slot for me, with the two animated faces that react to the gameplay as well as interact with the different symbols. I thought that was a nice detail to include as well as adding some personality to the slot.

Through the use of shapes and colours, the symbols are made to look different, which is nice on the eyes as I previously mentioned. I don’t think the originality of the symbols is very high, but considering the sheer volume of symbols on the screen at any one time I think coming up with original symbols would have been a waste of effort.

I thought the maximum wins were rather low, even for the biggest possible clusters because it makes it seem like this is rather easily attainable but it really isn’t.

I think during my time playing the biggest cluster I got was about 10 symbols together, which barely paid back my original bet with most low-paying symbols.

In that respect, I think players should be very careful considering the game’s High Volatility. Picking a bet between £0.10 and £40 per spin can go very wrong quickly if you don’t keep a close eye on your funds.

Tiki Fruits is not a very feature-heavy slot but each of the features plays a big role in the gameplay. You can expect all of them to show up almost continuously during your time playing.

The Cluster Pays mechanic is very obvious right from the start and doesn’t really need any explanation. The only thing new players should know is that the minimum size of a cluster is 5 symbols. Anything less doesn’t count.

The cascading reels are also clear since they play out instantly on the screen. The clusters are lit up, bounce and then disappear, making room for the new symbols as they drop down. Additional clusters will then also vanish and allow yet more new symbols to drop in.

I thought the biggest variation on the ideas of cluster pays and cascading reels were the fruit meters on the side of the screen. There are 5 types of fruit and they each have their own meter on the side. Whenever a cluster with a particular fruit is created, they fill up the meter. The more symbols in a cluster, the more the meter fills up.

The sixth meter is a Bonus meter, which fills up when there’s a bonus symbol on the screen. Once this happens, the Free Spins mode starts. Players receive a random number of spins. During the Free Spins mode, the meters work the same way except their filling persists throughout the entire mode.

When a fruit is removed from the playing field, it will stay out of the game for the remainder of the free spins. If the Bonus meter is filled up again it will re-trigger more free spins.

I thought the free spins mode clearly leans on the low-paying fruit symbols being filtered out to create bigger wins with high-paying symbols. This barely paid off in my time playing, one time having all fruit symbols filtered out and having 5 free spins in a row without a single win. It is very much a highly volatile way of winning, explaining the slot’s high volatility at the same time.

Tiki Fruits is a fun, colourful slot that strays very far from the classic slot experience. For that reason, I expect most players to be deterred by the gameplay this game offers. Which is a shame, because I thought it played very well and was fun to watch. The different fruit meters add an incentive to keep going, even though the Free Spins mode was not as lucrative as it’s made to look.

The game looks great and the focal point was the animated Tiki Totem with two different characters on them. They don’t do a lot but they make the game feel more alive as well as sometimes interacting with the game. When a spin has no clusters they might blow away random symbols to have them cascade down and perhaps trigger a win. This is very rare, however, and more a gimmick than a feature.

The game offers a max. win of 2,000x your bet which is really impressive but felt unobtainable. The game has no wilds and it would require the highest paying symbol in the game to completely fill the 80 slots on the screen. That just seems extremely unlikely and because of that, uninteresting.

Browse casinos with Tiki Fruits and other slots from Red Tiger. Create an account and try the game for free before making a deposit.

You can play Tiki Fruits in English, Finnish, Swedish, German and 18 other languages. 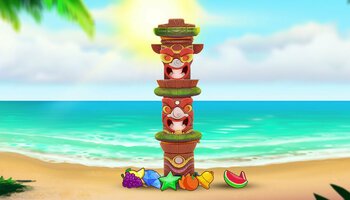