There is something about the South Pacific and tiki masks. It looks like people couldn't imagine their lives without them because they are all over the region, from Hawaii to Micronesia.

I seriously think that the Easter Island heads are oversized replicas of a tiki totem. Thankfully I am not an expert on the cultures of Easter Island, but I did have a huge A-HA moment when I saw a meme that showed a stone head on one side of the globe and feet on the opposite end.

The fascination with tikis is obvious. They make the perfect online slot theme and there are dozens of games featuring all kinds of tiki mask predicaments - there are even Vikings wearing them. But the game at hand is called Tiki Tumble and with everything but the cocktail.

I was able to enjoy a game with an engaging base game that comes with 'Nudging Wilds' and a free spins bonus that can become ripe with win multipliers.

I've played a few games with tiki masks and I think Push Gaming has made the best one thus far, mainly because the awesome graphic design is backed by a win potential of more than 3,000x your bet and the variance is between medium and high.

Push Gaming has made Jammin' Jars and I can definitely see where they developed a knack for drawing and animating objects with a human-like expression on the face. All of the high-paying symbols on Tiki Tumble are totem masks striking up bizarre expressions, which is very much in line with their original anthropologic purpose - to scare small children into obeying their parents.

The symbols that you will probably want to see more of while you play the game are the wild and the scatter. In terms of graphic design, these are the only tikis that are fully animated and I think to an awesome effect.

Even though none of the remaining symbols can perform its own tropical Kabuki dance, the style in which the lot has been drawn and rendered makes the game fun to play but not superficial, which is thanks to the wild symbol and the bonus feature.

So I am going to lay it to you completely as-is. Despite the feature with the wild symbols, I am not impressed by what the base game can do in the long run. On the other hand, the Tiki Tumble bonus feature is what I wish to see in all online slots because the payout potential in it can be quite lucrative.

Continuing where I'd left off in the previous section - base game! Not impressed because the high-paying symbols start returning the bet from the third one from low to high in terms of payouts.

The blue and green tiki masks pay 0.5x and 0.75x your bet and you get back your full bet at 1x from three orange masks. The purple (or is it pink?) tiki pays 1.25x your bet. The low-paying symbols pay even smaller amounts and this is what you are going to see a lot of while playing Tiki Tumble.

Payouts for four and five symbols seem more like it, but I'd noticed that these winning combinations tend to form with the help of the Nudging Wilds feature and not very frequently at that too. Nevertheless, it definitely feels good when you get four or five of a kind because they pay between 2x and 20x. The wild pays 25x your bet for five and 7.5x your bet for four of a kind.

The theoretical Return to Player of Tiki Tumble is quite decent - 96.49% and the variance fits the gameplay and its payout potential. Medium to high means that you may get a big win, but it may take many smaller wins before an outcome of that sort shakes out from the reel set.

This reflects what the bonus feature can do with the combination of free spins, Nudging Wilds and win multipliers. Eventually, it comes down to getting one or two Nudging Wilds wins early in the free spins bonus to get those multipliers higher.

I would recommend the game but I also think players should take a measured approach, just to get a good look at the math model.

Browse casinos with Tiki Tumble and other slots from Push Gaming. Create an account and try the game for free before making a deposit.

You can play Tiki Tumble in English, Finnish, Swedish, German and 16 other languages. 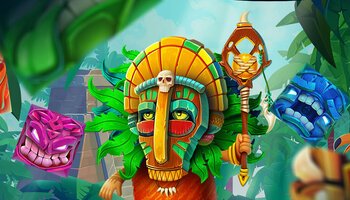