Titan Thunder Wrath of Hades is the second instalment in the Titan Thunder series by Quickspin. Hades, lord of the underworld, has gotten upset and decided to take it out on everyone else, letting players experience his wrath with free spins, a bonus game and sticky re-spins.

Released in 2020, this slot shows some considerable graphics with a lot of details and a number of nice animations. The game gives us a 5-reel, 3-row playing field that has an average of 25 bet lines on them. Considering its Greek mythology roots, the game does a good job at using some of its iconographies to portray elements of it, but the standard card letters detract from it.

The background shows us Olympus, floating islands in the sky with temples and waterfalls. There aren’t a lot of animations here but enough to make it seem alive. The symbols in the game are not as mobile, only triggering standard animations when part of a win. I do like that the graphics are sharp and clear, but this is hardly a unique trait when compared to other slots that have been released in the last few years.

Players have to play with quite a large selection of symbols which combined with the moderate number of bet lines means the game has High Volatility. Getting wins was not something that happened regularly and even when the game organically granted a win it was often not high enough to make back a lot of spins.

As a result, I noticed my funds dropping slowly as time went by. To deal with this, players can pick a bet between £0.25 and £100 per spin. Making sure that you don’t bet too much will enable you to play longer and with high volatility slots, you have better odds at getting a big win to make your bets back.

For people that like to play high risk or just the fortunate few, there is a max. win of 15,000x your bet waiting for you. This is quite a big win but it also requires the features to work in your favour, so it’s not something anyone should count on.

Titan Thunder Wrath of Hades brings a small number of features to enhance the standard gameplay. Players will likely already be familiar with the features that the game introduces but as always it depends on how they interact to see if they’re actually worth your time.

The features that are included in the game are:

The game isn’t very forthcoming with the special modes so players will spend most of their time in the base game. That means the only feature you’ll be dealing with most of the time is the Wild, which fortunately does appear quite often.

The real interesting parts are the special modes that only activate occasionally. The Sticky Re-Spins act like the jackpot mode, letting players have a shot at 1 of 3 jackpots. I found the method as to how this works to be quite confusing.

Even the smallest jackpot is unlikely to get triggered as it requires the player to fill the entire screen with the same jackpot symbol. Considering that most times the entire playing field isn’t even filled up completely makes it extremely volatile. The 3 jackpots reward respectively 20x, 100x and 1,000x your bet.

The free spins mode makes for the most interesting part, especially when you manage to get a few re-triggered free spins. That way, the multiplier is increased and you can really rack up some numbers. That is not very likely to happen though, so consider the volatility before playing.

Titan Thunder Wrath of Hades is a nice-looking slot that doesn’t do too much in terms of innovation, but it does the regular video slot ‘thing’ well. Players that enjoy a slot with some basic features and the ability to win 3 different jackpots will find exactly what they are looking for here.

I found the game to be quite enjoyable but I doubt it will stick in the back of my head for very long, considering the rather tired setting and the lack of anything very creative. Perhaps making Hades a bit more of a character would have helped it stand apart but the developers decided not to go that route.

If you are looking for something quick and easy to get into with high volatility and some features that are simple to understand, Titan Thunder Wrath of Hades delivers. It probably won’t be a favourite for a lot of people but it does what it offers well.

Browse casinos with Titan Thunder Wrath of Hades and other slots from Quickspin. Create an account and try the game for free before making a deposit.

You can play Titan Thunder Wrath of Hades in English, Finnish, Swedish, German and 23 other languages. 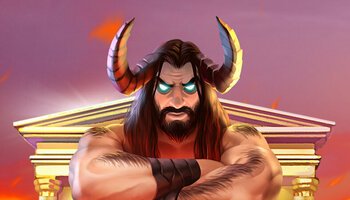