Titan Thunder is set in ancient Greece where the mighty Titans rampage across the Earth and wreak havoc. Luckily we can benefit from their power as they conjure up random Wilds, extra reels and Colossal Symbols.

The game takes place in a Greek setting but borrows heavily from its mythology, including showing Mount Olympus during the Free Spins mode. It was developed and released by Quickspin in 2015, which makes it one of their older games. I thought it still looked fantastic, especially the different titans and the backgrounds. I was a little disappointed the 5-reel, 4-row playing field was mostly filled with uninspired gems.

The 50 betlines are a welcome addition to the game as they make wins a bit more likely. The larger playing field also requires more symbols and the combination of both slots the game into a Medium Volatility. The game did grant smaller wins in between the bigger wins, but these were normally not big enough to make back any bets. That still required the special features to trigger big wins.

I rather liked the music even though it was light on originality. It used bombastic sounds to celebrate wins while the background music during the base game was a lot more toned down. Only during the Free Spins mode did I hear any longer-lasting music that felt epic and fitting the theme.

The symbols in Titan Thunder are rather strictly divided between high- and low-paying. Not only do they have different win values but they’re also distinct in the quality. The high-paying symbols are a selection of Titans, drawn in a lot of detail and with nice characterisation. In contrast, the low-paying symbols are simple shapes made to look like gems in different colours. It feels like a lot of time went into designing the Titans and after that, the other symbols were rushed through.

The playing field is larger than normal, usually a 5x4 playing field that expands into a 5x5 screen during the Free Spins mode. Despite that, the symbols stayed big enough to show a lot of detail which I liked. Getting a win highlighted the tiles involved.

Players can choose a bet between £0.50 and £100 per spin. As always, I think it’s important to start low and see how the game plays. Some slots, even with medium volatility like Titan Thunder, have a lot of time between wins which makes it likely you’ll run out of coins before a big win can put you in the positive again. Play the game on a low bet for a while before deciding if you want to increase your bets and possible wins.

Titan Thunder doesn’t have a lot of features but the two main ones are pretty important to the overall gameplay. I thought they were both done well and add something unique to the game. In combination with the larger playing field, I think a lot of modern players will enjoy the slot.

During the base game, I was awarded wins occasionally. It wasn’t very often but frequent enough to feel like the base game had some purpose to it. The medium volatility mostly came from the fact that the wins were often too low to pay back many spins.

In contrast, the randomly activated Titan Thunder feature was a lot more beneficial. The feature would add another reel to the game as well as add up to 8 additional wilds to the screen. This could sometimes still not trigger a win but in my experience, it would usually grant at least a few spins back. Because it’s random, the feature isn’t very dependable and there were times between each activation that lasted quite long.

The Free Spins mode was rather rare but when it activated it managed to be rather effective. The first thing a player does is pick one of the 5 titans as the Colossal Random Wild in the middle of the screen. The other Titans can also appear as Colossal Symbols, or as regular ones.

When the right symbols align this can instantly trigger a big win, counting a dozen or so paylines. Unfortunately, this didn’t always happen and I had very disappointing free spins because of it. On the other hand, I think that they would usually pay out enough to be interesting.

Titan Thunder is an older slot that still uses Flash, which might make it tricky for some players to get it running. Those that do will find that it has enough to offer without being very original either. The graphics were nice and I liked the way the setting was part of the game. On the other hand, the features weren’t especially original.

I didn’t think the max. win of 400x your bet is very appealing but some of the regular wins I got were big enough to keep my funds high and sometimes growing. This is what kept me playing a little longer than I had to. The fact that the features trigger frequently definitely helped, even if they weren’t always beneficial.

Players who enjoy a nice-looking slot that doesn’t stray too far from the classic gameplay experience but does have some modern features, probably won’t regret playing this game. The fact it uses Flash does mean you can’t use it on Chrome without fiddling with the settings and I found that the game is also not as widely available anymore.

Browse casinos with Titan Thunder and other slots from Quickspin. Create an account and try the game for free before making a deposit.

You can play Titan Thunder in English, Finnish, Swedish, Russian and 4 other languages. 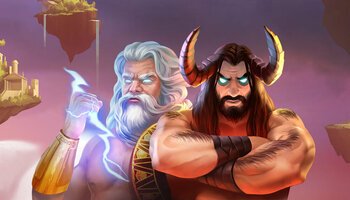