Toro 7s is the latest release in the series of Toro slots that show our famous bull and the antagonistic Matador as they travel around the world. This time, players find themselves in Las Vegas with nudging wilds, free spins and re-spins.

This slot was released in 2021 by Elk Studios, the developers responsible for the other Toro slots in the line as well. Players might be familiar with these previous variations such as Wild Toro 1 and 2, and Book of Toro. All of these share the same bull as the primary character, with similar art styles and familiar features.

With Toro 7s the studio decided to go back to the more classic era, resulting in a 3-reel, 3-row playing field with a total of 17 paylines. This makes sense since it is set in Las Vegas, considered by many as the heart of gambling in the West. Not many people look at this city in the desert and don’t think about slots and jackpots.

The game does a great job at setting the mood, using classic slot symbols to fill the reels. The only original symbols are those associated with the Toro and the Matador. Besides that, the game has some beautiful background art as well as a lightboard at the top that shows different vistas. Activating the free spins mode triggers a special animation on it.

Toro 7s makes extensive use of classic slot symbols that people will have seen in plenty of other games. This includes the obvious 7s, different fruits and BAR. None of these is made to look very original or exclusive which I think was on purpose. The studio wanted it to resemble those old-school slots that many older players will be familiar with. The only symbols that are unique are those associated with the Toro series.

When it comes to gameplay, players should be prepared for a High Volatility slot. Although I managed to keep my funds very close to where I started, there weren’t a lot of wins. The few wins I did get ended up being quite large but not enough to really put me over the edge. With an RTP of 95%, this game is below average when it comes to handing out wins.

To balance this out somewhat the slot makes it possible to adjust your bets. This can be between £0.20 and £100 per spin. There is also a jackpot. In this case, the maximum win is 10,000x your bet. Obviously, this will prove to be quite the incentive for a lot of players. In my experience, your best option with high volatility games is to keep playing for as long as possible. If that means using the lowest possible bet, then that is an appropriate choice.

Toro 7s has similar features as the other games in the series. The most important one involves the Matador and the Toro symbol both on-screen at the same time, where the Toro will chase down the Matador and leave Wilds in its wake. Since this slot has a smaller playing field, the effect of this feature is somewhat altered.

The game includes the following features:

The big unique feature of the Toro games has always been the Toro chasing the Matador if they appeared on the screen at the same time. Since the playing field is a lot smaller here, it doesn’t quite work the same way. Instead, the Toro wild will freeze in place as long as there is a Matador symbol on the screen. This means players will have an easier time getting a winning payline.

Toro 7s is the last of the Toro slots according to the studio, at least for now. It seems quite fitting then that they stop by visiting Las Vegas. The classic slot format isn’t my favourite but it is done well in this game. I didn’t feel like the slot was dumbed down or easier than the other games at all.

My biggest complaint would be the change in the Toro and Matador feature. However, I also can’t see how they could have done it better. There is simply not enough room on the screen to really make the feature worthwhile otherwise. To compensate, they did add a bonus game. Getting that to activate proved to be another challenge though.

In general, I would say this game will be a nice experience for players that enjoy the Toro slots. If you’re someone who enjoys classic games with some modern twists it will also fit your style. The high volatility and large jackpot might also attract the high rollers.

Browse casinos with Toro 7s and other slots from Elk. Create an account and try the game for free before making a deposit.

You can play Toro 7s in English, Finnish, Swedish, German and 19 other languages. 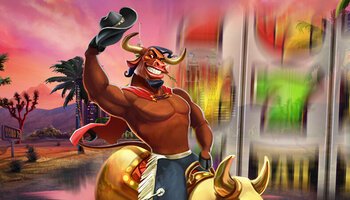