Get ready for eight reels and 30 pay lines of jampacked action in this fast-paced slot game by Red Tiger Gaming. As you might or might not know, I loved the previous offering, Totem Lightning which satiated my hunger for speed. Thanks to the features and lightning-speed action on the reels, it had me edging on my seat. So, when this subsequent slot game was released, it piqued my interest.

What makes this slot game special is that it is set on a vast 8-reel grid with 30 pay lines. Like the previous offering by Red Tiger, it boasts the cascading reel function. The same concept applies here. Land a winning combination of low-value paying symbols and they’ll be replaced with new symbols from the top.

The design of this game has been kept modest enough, but still retains its style and class. Lined up with arrows and headdresses, the game has reserved its original American Native theme, but with more ways to win and a huge pay-out of 7,777x your stake.

If you are familiar with Turning Totems, by software game provider Thunderkick, you might already be familiar with the theme and how things pan out in this game.

Most surprisingly, there are no scatters, free spins or even wilds in this game. What’s in it for you? Plenty of exciting features, which sees Totem Lightning Power Reels deliver on all fronts.

Despite the grandeur of the reel setup, this game is quite simple and easy to follow. As already mentioned, there are no free spins, and your winning chances rely heavily on the cascading reel set up, which most players should be familiar by now.

Following each cascade, if more low-value symbols form part of a winning combo, they are also tracked on the Symbol Strike Bar and wholly removed from the reels.

This feature can see you making a neat profit for more winning cascades, eventually leaving you with higher paying symbols on the reels. When that happens, it is much easier for you to strike big wins.

Like its predecessor, this game also boasts the Lightning Strikes, which are randomly triggered and strike down any low-value symbols of the reels and adding them to the Symbol Strike Bar.

At first, when I saw the reel setup, I was excited to get started at the game. However, once I started playing it, I quickly realised that this was a simple game without much thought going into it.

Sure, it’s a highly volatile game, and you have the chance of winning 7,777x your bet (which I have never succeeded in triggering), but although it looks impressive at first glance, there’s not much to it that we haven’t seen in the previous game Totem Lightning.

The only way to unlock any riches is by hoping for more cascades and to trigger the Symbol Strike. Unfortunately, this game quickly lost its lustre for me, and although I hoped for much more, I found myself frustrated with the lack of originality.

I would have hoped for this game to have a higher RTP than that of 96.21%. Once again, I found myself going through long dry spells without winning, and although the turbo mode is heaven-sent, I had to tread carefully. Since the Turbo feature and Autospin features are great for those of us, who want speed on tap and because this is a highly volatile game, it is wise to have a set budget for this game.

In my case, I depleted my bankroll quickly and left me increasingly irritated with the lack of wins — each to his own. If you prefer volatile yet straightforward games, give this game a go. However, I would say that its predecessor Totem Lightning offers the same thrills yet on a simpler layout. Not all that glitters is gold and this especially applies to this game.

Browse casinos with Totem Lightning Power Reels and other slots from Red Tiger. Create an account and try the game for free before making a deposit.

You can play Totem Lightning Power Reels in English, Finnish, Swedish, German and 18 other languages. 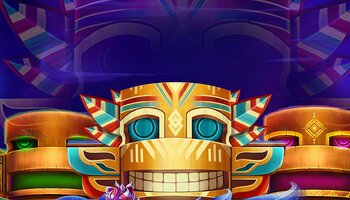