Oh wow! Red Tiger Gaming strikes again. I hope your spirit guide is on your side in this game so that it can remove low paying symbols and trigger colossal cascading wins.

I have to say that what most struck me about this game, is the speediness. Dear readers, I lack patience, and this game helps me quench my thirst for speedy reels and quick pays. When Red Tiger Gaming released this game, it took me by surprise. I find Red Tiger games to be hit or miss, but this game exhibits some superb features, that made me seek more games by the software provider on a regular basis.

Built over five reels and 40 pay lines, lightning strikes to trigger re-spins, giving you the chance to win up to a whopping 1,000 times your bet. Oh, and bets start from as little as 20p per spin, which makes it great for low and high rollers.

Exhibiting a western theme, Red Tiger invites you to enter the spiritual world of Native Americans and to explore their Totem tradition deeply. In terms of graphics, I found the game to be visually outstanding, yet lacking all the hoopla of modern slot games. The colours themselves are sturdy, leaving an impression, but there are no Parallax scrolling effects. I would assume that this was done with the aim of balancing things out and keeping things simple enough for newbies. In the distance, you can spot wigwams spread across the village in white and red colours.

As the symbols come thudding down with a puff from above, it is reminiscent of Gonzo’s Quest by fellow software game provider Net Entertainment, but it has been given extra velocity to keep players on their toes. At least, my toes, that’s for sure.

The soundtrack is that of combative yet traditional sounds; booming in the background as you play along without being too distracting. I found it calming yet soothing as I was whizzing my way around the reels.

And if you really want to zoom past the game, there is the Autoplay feature, which can be as high as 5 million spins. You can mostly savour the dopamine rush, as symbols drop with a thud into place.

Totem Lighting has been designed with a Native American theme so you can feast your eyes on the Native American culture and experience. Symbols on the reels as well as the design make room for you to enter the spiritual world.

The lowest paying symbols are the A to 10 symbols which are staple low-paying features across most online slot games.

Bear in mind, that whenever you hit a winning combo, winning symbols will be removed and replaced with new ones from the top giving you a re-spin.

I especially love this game by Red Tiger Gaming and found it to be enjoyable yet addictive at the same time. If you opt to bet manually rather than to use the Autoplay function, you should be able to relax and follow as the action unfolds.

With an RTP of 96.28%, this might not be the most attractive percentage to slot players who want to get great value for their money. However, I found that when there are lightning strikes, symbols strike and progressive jackpots at play, Red Tiger Gaming can almost be forgiven for this discrepancy. This is due to the fact that the entertainment factor is kicked up a notch.

I found that I could go for a long time without achieving a win. Perhaps it’s the soundtrack banging in the background which builds up anticipation and slows downtime, but once the lightning strikes feature kicked in, it made me eager for me.

For me, the game’s allure lies in its features. Okay, so the RTP is slightly lower than that of rival slot games, but when the game’s main elements come into play, you can expect to be showered with wins.

Check out the following offering by the same maker, Totem Lightning Power Spins, for a bigger reel setup.

Browse casinos with Totem Lightning and other slots from Red Tiger. Create an account and try the game for free before making a deposit.

You can play Totem Lightning in English, Finnish, Swedish, German and 18 other languages. 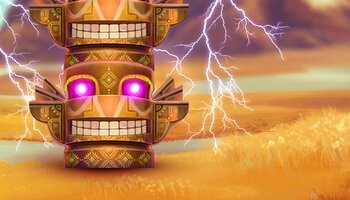