If your barbarian princesses, skeleton ghouls and elven swordsman can slay the black dragons and win up to 100,000 coins, then put them to work on the energetic Tower Quest slot. I've a weak spot for awesome slot design, especially when there is a set of epic characters on the reel set and an interactive bonus feature.

The game at hand comes from the epic fantasy kitchen of Play’ GO which is no stranger to making games in that style. If you haven't played Troll Hunters 1 and 2, Ring of Odin and The Sword and the Grail then you may have missed out on a handful of awesome games.

Tower Quest reminds of a fantasy card game. It has the type of symbols that can fit any deck that is all about battling extraordinary creatures and casting vicious spells on your opponents. The opponent here is the house, which is holding up 500x your bet as the main prize for completing the quest. Not a bad premise for a game that comes with a bonus feature that actually puts you in control of a set of cards, so doing battle is what you will end up doing if you decide to play this game.

I've enjoyed most of the gameplay, but I can't fully say the same about its payout potential. 500x your bet is alright, but not quite the amount that can add that x-factor to the gameplay which completes a thrilling experience. Nevertheless, I think the game is worth playing and chancing upon a big win is never a poor way to end, or start, a quest.

The premise of the game is clear from the get-go. At your disposal are five high-paying symbols and four royal cards that can join forces in making winning outcomes on a layout of three rows and five reels. That which gives Tower Quest a memorable character is the animation following every winning outcome, which is followed by orbs of lightning passing through each payline.

The wild is the symbol that I've anticipated more than any other from the paytable because it is the name-giving symbol, which by the way, can land expanded on the full reel.

The scatter is the other symbol that had me impressed. If I meet a person of that semblance on the street, especially if he is dressed in a purple robe, I would walk five steps back, turn around and probably spit on the ground and knock on wood a number of times. That's how convincing this symbol is.

Sound-wise, the choice of music and audio effects make Tower Quest a complete product. Those who pay attention to these things will find a detailed narration of the events that take place on the reels and help towards an immersive experience.

This part of the gameplay is pretty unique because you get to roll the dice while playing against the wizard. The rest is all left to the chance, but first things first, the wild symbol.

The red flask can trigger 5 spins with the following modifiers:

The blue flask needs fewer symbols to enable the player to cast the respective modifier:

I must admit that I am not impressed with the payouts, unless we are talking five matching symbols on a payline, which is the rarest form of a winning outcome.

It makes sense why the paytable has been structured like that - it's because of all of the extra features, multiplier wilds, extra wilds, wild reels and free spins, as well as the card-battle bonus feature.

Payouts for the royal card symbols are significantly lower, between 2x and 60x your bet across the board.

I got to try my hand at the vial-collecting feature because Tower Quest isn't stingy with these symbols. It can take about 50 spins for either of the flasks to accumulate to the first benchmark.

The bonus feature can land you cash winnings, but there is a downside to the possible end result of winning 500x your bet, as the wizard starts the battle with more health points than you.

Despite the not-so-savoury symbol values I enjoyed playing Tower Quest every time, because of the extra features. This is one of the few games that enables autonomous selection amidst all of the random number generator outcomes. It is something that I think most players will enjoy.

Browse casinos with Tower Quest and other slots from Play'n GO. Create an account and try the game for free before making a deposit.

You can play Tower Quest in English, Finnish, Swedish, German and 30 other languages. 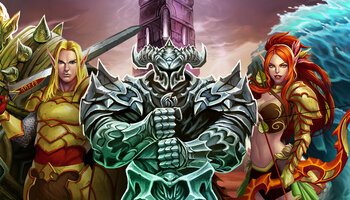