Treasure Mine Power Reels takes the player back under the earth as we return to our dwarf’s mine network. Players are this time treated to a larger playing field while most of the game stays the same, with bouncing wilds to keep them entertained.

This version of the game was developed by Red Tiger just as the original, this time released in 2021. Most of the appearance stays the same, which means people familiar with the first slot will already know most of the details. The main difference is immediately apparent. Instead of the usual 5-reel playing field does this game come with a massive 8-reel, 6-row playing field.

Still, the game only has 30 paylines which seems low for a slot with such a massive play area. This is augmented somewhat by the power reels mechanic that I will go into more later. The presentation of the game reminded me a lot of the first version of the game. The background again shows us a deep mine with piles of gold and jewels. The different symbols are smaller due to the size of the playing area but are easily distinguishable.

When it comes to the music I found it to be very subdued. I could hear a rather generic slot song play in the background but it was mostly drowned out by the gameplay sounds. Having the reels spin wins triggered or wilds appear would be much louder than the music. Even when I did hear it, I didn’t feel like it was anything special or even fitting to the setting.

Treasure Mine power Reels makes use of the same symbols as the first game. This means generic card letters for the low-paying symbols and mine-related symbols that are worth more. Since they have to be smaller to still fit the screen, some of the details are lost. The Colossal Wilds are the exception, with the dwarf and the dragon both shown on a 2x2 tile. This also lets them show off their animations a bit better.

The slot has Medium Volatility which mostly meant that the payouts per win line were very low. With the power reels feature the game expects you to get a number of wins at the same time. This proves to be rather hard, however. The RTP is 95.75% and that’s a bit lower than the average. I found that my funds dropped pretty quickly as I played with only the occasional win.

Players can pick a bet between £0.10 and £80 per spin. This makes it a bit easier to play for a long time, which I found the best way to get a bigger win. That said, using larger bets obviously also grants bigger wins. The maximum win of 1,172x your bet is very small, especially considering the game’s volatility. I wouldn’t recommend this slot if you are looking for a massive jackpot.

Treasure Mine Power Reels has a few different features. There is no bonus game or free spins mode in this game. The slot relies heavily on the use of different variations of wilds to trigger bigger wins.

The gameplay feels pretty easy when playing the game. You will see the power reels every spin, but they don’t always cover the entire reel. Although symbols are always stacked, these can be as few as 3 rows high. Wilds do not appear stacked very often, and if they do it’s randomly. The power reels are the main way to get a bigger win, as three reels with the same symbols can quickly pay out multiple paylines.

Wilds come in different shapes and functionalities. The small 1x1 Wilds only appear as an effect. Wilds that can appear on the screen from a spin are always colossal 2x2 Wilds. There are 3 types of Colossal Wilds: the diamond, the dwarf and the dragon. The Diamond has no special function except that it can be mined if the Dwarf also appears on the screen. The Diamond and the Dragon means random Wilds are added to the playing field.

The Dwarf and Dragon together are the most beneficial. The Dragon will burn the Dwarf, causing it to run around in a panic. As they do so, the path they follow will have the symbols replaced by Wilds. As such, this can quickly turn into a big payout if the wilds appear in the right places.

Treasure Mine Power Reels feels like a very close copy of the original slot. The features are largely the same, with the same functionality for the different Wilds. Players that enjoyed the original game will likely also have a good time with this one. The graphics are exactly the same, the main difference being the bigger playing field.

I’m not exactly sure how I feel about the power reels. Even though they can be a good way to get a big win, in my experience this only rarely pans out. There are a lot of different symbols and with the power reels feature this means it’s very likely for the wrong symbol to take up an entire reel, blocking a win. As such, it felt more like a hindrance than a boon.

That said, the game is very easy to get into. The slot basically explains itself if the player spins a few times. All the action is concentrated on the main screen, which makes it perfect for purists. The Wilds meanwhile add enough chaos to make a seemingly random spin into a big win.

Browse casinos with Treasure Mine Power Reels and other slots from Red Tiger. Create an account and try the game for free before making a deposit.

You can play Treasure Mine Power Reels in English, Finnish, Swedish, German and 18 other languages. 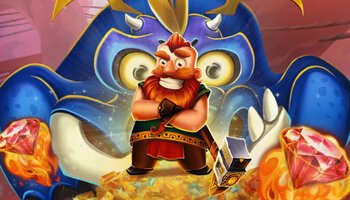