The Treasure Mine slot might be a hidden treasure with its exciting bonus game and the chance to win up to £500,000! Or is it just a disappointing lump of coal? Join me as I take a closer look.

Play as Redbeard the adventurous dwarf, delving into the Treasure Mine trying to find untold riches. Unfortunately for him but luckily for us, it’s all guarded by a ferocious dragon. This 5 reels, 40-payline slot brings the format into the modern age with its special features, three different wilds that interact with each other in unique ways and a great bonus game.

The Treasure Mine slot has some excellent graphics. The reels are filled with high fidelity symbols that stay sharp no matter how big the screen I play on is. The background is lightly animated and showing a dark mysterious mine.

The entire slot is made in a cartoony style; Even the dragon looks rather goofy and non-threatening here.

Treasure Mine is in constant movement. Having any combinations triggers a slight animation that adds some flair without interrupting the gameplay. The biggest visual events happen when you get to the special wins, such as the mining run or the different wilds. The animators really went all out here. No static images but constantly moving characters and surroundings.

Treasure Mine plays a nice, simple song in the background while you’re playing. This chipper tune goes well with the setting since it’s so lively and fantastical.

#During gameplay, you will hear short sound stingers when you get a special symbol even if it isn’t a win. It knows how to keep drawing my attention back to the game even when I am using Autoplay.

This slot uses basic symbols as lower-paying ones and has several game-specific icons for the more valuable symbols. From highest to lowest they are:

There are 40 paylines in the game which run from left to right. There are also some unique symbols that activate the bonus features. Let’s take a look at those next!

The Bonus Symbols come in the shape of a gold-filled minecart. When you land three of a kind on the screen it activates the bonus game: Treasure Run!

The Treasure Run has Redbeard- the daring Dwarven miner riding his minecart through the mine collecting treasure as he goes. As a player, you get to choose which of the three tracks you want him to follow.

I liked this bonus game a lot. It breaks up the standard gameplay and has a fun visual way to show you how to collect treasure. Make the right choices and it can last quite long. When you do finally make the wrong choice and the track ends, you obviously still get to keep the treasure you collected.

The game also has different Wilds. In total there are three that all interact with each other in unique ways. The Wilds on their own can help you hit winning paylines like normal Wilds. Get two of them at the same time and fun things happen.

When you get a Redbeard Wild and a Treasure Strike Wild, Redbeard will leap out of his spot and onto the Treasure, eagerly hacking on it to collect some rewards for you. The more Treasure Strikes on screen the higher the win.

Get a Treasure Strike Wild and a Dragon Wild at the same time, the dragon will shoot a fireball on the Wilds and multiply each of these. A great way of getting wins on multiple paylines.

Finally, you can get the Redbeard Wild and the Dragon Wild at the same time, causing the dragon to shoot fireballs at Redbeard. Redbeard then makes a break for it trying to escape the flames, leaving Wilds behind him as he goes.

It sometimes happens that you’ll get all three types of Wilds together! Each of them will play their own bonus feature separately and combine the total win.

You’ll get the dragon multiplying the Treasure Strike Wild to get it to expand. Then Redbeard will jump on these to mine them. And finally, the Dragon will shoot at Redbeard and cause him to add even more Wilds to the screen.

Not only an amazing way to get a big win but a hilarious spectacle to watch as well!

The Treasure Mine slot is the kind of game made for players who like to have a rather classic base game with modern additions. You get the standard reels with obvious paylines, but these special features can grant you with some big wins that you normally wouldn’t have gotten.

I liked this slot quite a lot and played it for a little longer than I had to write this review. It offers an excellent mix between quick spins and bonus features, keeping me interested and rewarding that interest with regular wins.

Play Treasure Mine for free

Browse casinos with Treasure Mine and other slots from Red Tiger. Create an account and try the game for free before making a deposit.

You can play Treasure Mine in English, Finnish, Swedish, German and 18 other languages.

Treasure Mine supports GBP, EUR, SEK, NOK and 7 other currencies. 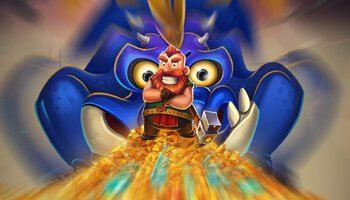