Treasure Room brings us into a hidden storage area where a large number of riches are hidden. This game can be traced back to the early days of the video slots, offering a look back in time as well as showing the first version of Wilds and Paylines From Both Sides.

This slot was originally released way back in 2009 by veteran studio Softbet, who brought this classic 5-reel, 3-row playing field. As can be expected from a game that’s more than a decade old, the graphics did not hold up and many of the gameplay features we’ve gotten used to are nowhere to be found. Instead, we can enjoy a look back at the figurative prehistory of these video slots.

The game does a lot of things that we do still recognize now, such as having low- and high-paying symbols as well as having some animations. This slot actually used the Paylines From Both Ways mechanic, counting wins on one of its 20 paylines from left to right and vice versa.

There’s not much we can expect from the sound either, having no music at all during the game and only playing brief jingles whenever the player spins the reels. There is some ticking when the reels stop moving and getting a win will trigger a short gong sound which was popular back in the day. This sound loops for every win on a single spin, so getting a big payout might be hard on the ears.

The game actually does offer a wide selection of symbols, all of them original and created for the slot. They are all based in some way on either treasure or time, hinting at the room being filled with loot from various periods in human history. Unlike most modern slots, the game does not use card letters or suits for low-paying symbols, making it a refreshing exception.

Treasure Room gives players the opportunity to win a truly massive jackpot, coming it at a max. win of 100,000x your bet. The catch is that this jackpot can only be won if the maximum bet is enabled, with players being able to pick a bet between £0.02 and £100 per spin. The game has Medium Volatility so spinning at the maximum bet won’t be something that is doable for most players, making this a high roller slot.

Treasure Room only has a small number of different features that augment the gameplay only slightly. Players will find themselves in the base game most of the time, and won’t have to worry much about the features as they don’t activate often.

Paylines Both Ways is the most common feature to play a role in the gameplay, somewhat helping the player get wins by simply having the same symbol on a payline from either left to right or the other way on the screen. The three-of-a-kind wins aren’t especially big but every bit helps.

Wilds appear only occasionally and I found that the treasure chest mechanic actually showed up more often. When the player would manage to get 5 on the screen they are awarded the highest win. The jackpot is obviously only when the maximum bet is selected, but players will receive 1,000x your bet regardless.

There are a few other features that didn’t feel very different. The main way to tell them apart is that they use different symbols and the Bonus Round takes the player to a separate screen, but both the Bonus Round and the Sword and Shield features translate in giving the player an instant coin win.

Treasure Room is a trip down memory lane for players that either have nostalgic memories for the older games, or for players that are curious about what the games used to look like. There are definitely elements here that have persisted through the years, such as Wilds and Paylines Both Ways. Other elements have been replaced or fallen out of favour.

I had a nice time with the game for a while, but the graphics are really outdated and there is no sound to speak of. It was an entertaining time to see it play out again but after a while, I got bored and was ready to go back to modern times and its selection of superior slots.

The maximum win is definitely appealing considering the potential size but the jackpot won’t be something that is feasible for all but the biggest high rollers. Play this game if you’re a fan of older slots or if you are curious about them otherwise, I wouldn’t recommend it.

Browse casinos with Treasure Room and other slots from Betsoft. Create an account and try the game for free before making a deposit.

You can play Treasure Room in English, Finnish, Swedish, German and 21 other languages. 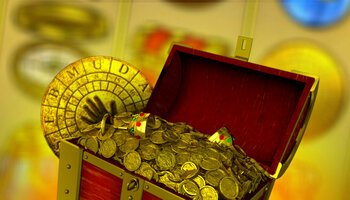