Troll Hunters 2 is a new take on an awesome game that comes with more of everything that was great about its predecessor.

Players who like games that push the boundaries will find a perfect match in Troll Hunters 2. The gameplay is nothing like the other grid-based systems out there.

You get a layout of five horizontal and five vertical rows that acts as a platform for cascading wins. Wilds and win multipliers can post on any spin but the kicker are the multiplier wilds that can reach 3x your win.

The same thing that I loved about Troll Hunters is part of the sequel and that is, long winning streaks can get a lustrious icing in the form of a free spins bonus.

In other words, if you get the cascading wins going, and they go for long enough, you can get the bonus game to trigger and top it all off with 5, 7 or 9 free spins.

Make no mistake, Troll Hunters 2 is a high volatility affair so be ready to put your balance to a test. The fun part about taking a risk on a game of this character is that it can award payouts as big as 5,000x your bet from a single spin.

Play'n GO has created a visually pleasing premise that takes you to the snow-covered peaks of the Nordics. You'll be in the company of a centrally-placed grid, three meter components to the left and a Viking heroine to the right.

The game doesn't have a powerful soundtrack but the sound effects are engaging. But I don’t think you would even notice that because the game aims to hold your attention with its visual effects.

Winning outcomes, added wilds and multiplier tokens are channelled in a smooth manner from the reel set onto the meters. Another notable trait is that the Viking she-warriors change as you progress in the game.

Overall, the graphics are satisfactory even though the symbols are small in size, given the grid-based layout.

Troll Hunters 2 is a game whose base game can act as a supercharged bonus feature and the bonus can act as a reward for its big-win potential through the winning cascades. The two kinds of Wilds play no small role in this.

These do the usual - they substitute for any symbol on the paytable. The Wilds can post on any position and pay a prize if three or more symbols fall adjacent to one another.

The meter in the left corner, consisting of a shield and two battle axes, needs to fill up all three charges to release the type of Wild symbol showing in the centre.

To unleash one or two multiplier Wilds you need to get three winning outcomes consisting of three or more Viking symbols from the same chain of cascades.

One of the more interesting parts about the game is the way the bonus feature is triggered.

You will notice that the wording BONUS shifts along the horizontal rows with every new spin. When a winning cascade is launched, BONUS remains on that row until there are no more winning outcomes.

To trigger the bonus game you basically need to see the letters revealed and this can be achieved only if all symbols on the respective row are cleared.

This is where Troll Hunters 2 makes things a little bit tricky. You can get multiple cascades that sink the rows towards the bottom while leaving one or two vertical rows intact.

Nevertheless, the bonus feature does trigger in the midst of the odds and you can get your pick between the following options:

The bonus game can't retrigger but there is the Win Spin extra to save the day and prolong the gameplay.

This feature triggers when you fill up the five-gauge meter in the bottom left corner.

In the event, the troll comes into the picture, awarding you an extra spin plus a block of four Wild symbols with the corresponding multiplier value.

The best part about it is that the Wilds remain in play until there are no more winning cascades.

Players will find a payout structure that reflects the cascading wins mechanic. No surprises there. Only one of the ten symbols on the paytable can pay 1x your bet for three matching symbols - and that is the Wild, which is the highest-paying symbol.

On the other hand, Troll Hunters 2 can deal enough Wilds on the same spin, including multiplier Wilds, to help link five matching symbols in a row. These outcomes are a lot stronger, especially for the Viking symbols.

Bets are standard for most games by Play'n GO and range between 10p and 100 pounds per spin. One note on the payout system - winning outcomes are made for three, four or five matching symbols that post on a horizontal or vertical row.

The symbol payouts are as follows:

Now, which one is more likely to occur of the two? I'd go with the new game. In my opinion, high volatility and a smaller max win potential have better odds in that regard.

And one last notable detail is that 500x your bet can be won by clearing the entire grid, which is more than possible in a confluence of cascading wins and Wilds in the right places.

Overall, Troll Hunters 2 is an amazing game, but it is speedy too and can go through your balance fast, so it’s best to pace your spins.

Browse casinos with Troll Hunters 2 and other slots from Play'n GO. Create an account and try the game for free before making a deposit.

You can play Troll Hunters 2 in English, Finnish, Swedish, German and 31 other languages. 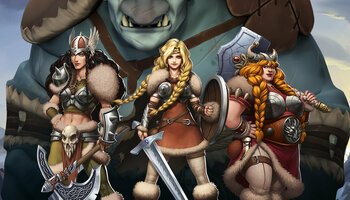