Has your village been plundered by trolls? Leave it to the band of women who go by the name Troll Hunters and they will wipe the floor with the green brutes and land potential winning outcomes of up to 2,057,805 coins.

The game got my interest with its grid-based layout of five horizontal and five vertical rows that serve the cascading wins system of payouts. On most occasions, these games are fun to play, but they need to be made well and pack a set of engaging features, such as the game at hand.

I am not sure which of the women is Lagertha, but they all look like they've come out from the Icelandic sagas. Since they are in the lead role, winning outcomes composed of their symbols can pay the best amounts, but Troll Hunters has few more nice surprises in that regard.

Everything about the game revolves around the cascading wins system that can award win multipliers starting with the second consecutive win. Nothing unusual there, but there is one aspect of the game that I find thrilling, although it is not easy to come by, which I will go over in just a bit.

As for extra features, Troll Hunters can trigger a free spins bonus where you are given a gnarly troll as a punching bag, so as long as the winnings keep coming, you too are going to be happy to see some Viking on Troll violence

The graphic design reminds of a graphic novel that deals with the subject of fierce Viking warriors who happen to be three lovely ladies. The petite one wields the biggest sword, the plus-sized madame has a skull-bashing Warhammer and the one that's got the Valkyrie wings on her helmet has a menacing battle axe.

If Play'n GO weren't making slots they would have done just as well making graphic novels in the mythic fantasy genre. Since the premise is known from the title, the question that arises is, where are the trolls? Well, they are certainly not around when the warriors are having fun in the sun, but once you get to the Troll Hunters bonus feature you will see the kind of beasts you are up against.

Just one more detail about the design - the sound. I find it worth mentioning that this is an orchestrated piece that strikes up a mood for donning on your cape and leaving your house for a quest - any kind of quest, even out to the curry place.

I find the bonus game really exciting. Players can get win multipliers for each consecutive win and bigger payouts compared to the base game. I think playing Troll Hunters is worth it just to reach the bonus game.

In addition to the engaging base game and the high-pay potential bonus game, Troll Hunters comes with another feature that adds more spice to the gameplay. You can call it an instant jackpot, which I think is when you get enough cascades to clear the entire grid, in which case you make a wholesome 1,000x your bet. This outcome is possible in the base game and I believe in the bonus game, but it is certainly a very rare thing to see.

The symbols' values range between 0.15x your bet for three skull mug symbols and 25x your bet for five symbols of the blonde Viking warrior. Play'n GO has balanced out the cascading wins payout system by making all payouts for three symbols smaller than the bet that triggers these outcomes. The blonde warrior's symbol pays 0.50x for three of a kind, but if you make a second and a third cascade, the prizes will grow bigger.

Troll Hunters has medium variance and a theoretical RTP of 96% - right on the average. Over a longer period of play, players are likely to get winning outcomes that range from small to big. Epic wins are possible too, as the theoretical maximum payout suggests, but considering the variance they are extremely rare.

I am sure that Troll Hunters has become famous over the years, so much so as to warrant Play’n GO to make a sequel in Troll Hunters 2. I kind of missed out on that game, so I can only vouch for the one at hand.

On the other hand, if you are looking for a grid-based game that comes with reel modifiers and is made by the same provider then you may find in you a soft spot for the Moon Princess slot. I’d play either-or, any time.

Browse casinos with Troll Hunters and other slots from Play'n GO. Create an account and try the game for free before making a deposit.

You can play Troll Hunters in English, Finnish, Swedish, German and 30 other languages. 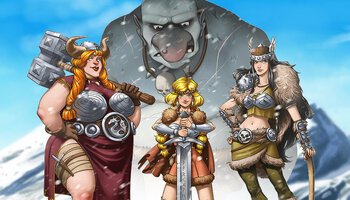