I think that most people have no doubt in their mind that illusionists are extremely good at conjuring up unbelievable trickery for the eyes and the wits.

Acts that appear to be a miracle are well-mastered illusions - a refracting of movement and sight, made possible with the help of shadows and light. And yet people in the audience can't help but ask the question, how in the world did he, or she, do it!?

The True Illusions slot by Betsoft pays homage to that form of art and entertainment. Even though the game as a whole teeters on the tacky side of things, I was able to stay in it on three occasions because it comes with three extra features and a lively graphic design.

On the other hand, this is one of those productions by Betsoft where the company couldn't have made selecting your bet any more counter-intuitive.

If you are interested in playing True Illusions you are going to have to figure out the Choose Coin and Bet Per Line settings at the bottom, as well as decide how many paylines to wager on.

Nevertheless, three rows and five reels can spin across a maximum of 30 paylines. Perhaps it made sense back in 2011 to give players the option to choose the number of active lines, but seen from this point in time, I wonder why did they even bother.

Perhaps this is my ostentatious slot punditry, but having simple settings at hand beats the task of clicking 30 times to go back to your desired number of paylines.

Surely enough I played on all 30, which had set me back 30p per spin since I played a coin size of 1p. I can't say that I was too happy with the payouts, but the game had its moments.

As I was playing the game, I tried to figure out whether Betsoft had intended to make the reel set or the illusionist the focal element of the game. The question popped up because the illusionist makes his presence known, all-the-time! I liked his gigs for the better part of my time with True Illusions, until it became a little bit too much. But that is just me. If you make a pause between your spins, the illusionist will talk to you and do his magical tricks.

The game is truly steeped in lively animation and sound. The grand illusionist is quite fidgety, pulling out bouquets and snapping up a pretty flame in his palm. There is also a video bit for most of the high-paying symbols. Winning outcomes are marked by a short animated sequence that tells the story of the particular symbol. In that regard, True Illusions is rich and unique.

I am still wondering how Betsoft succeeded in creating such a heavily-animated game while being able to maintain a speedy dynamic in the gameplay. You'd expect a slow-paced reel adventure, but True Illusions is actually quite exciting. You can short-stop the reels for a speedier game if you want, once the effect of the illusions wears off.

If anyone decides to give the game a try, leave the sound on as there are plenty of cool sound effects that are part of the jazzy musical score.

The best win outcome that you can get in the base game is with the stacked wilds. The wild on its own can substitute for any of the regular symbols, but landing three on the third reel locks it in place.

This feature can play out for up to seven spins. One important caveat - change the bet during the wild reel spins and you will spoil the magic! Nevertheless, I don't see anyone changing their bet while this feature is unfolding because your chances for multiple wins are getting a significant boost.

I had this feature triggering several times as I was playing True Illusions. It's a simple pick-me game that can reward an instant cash win.

To trigger the feature you need three card symbols to land anywhere on the reel set. In the event, the magician spreads out his cards and you use your pointer to select one. Prizes can range from petty to decent, but don't get your hopes high for a big win. I didn't get one, but getting the feature may treat you to a different outcome.

And last but not least, the free spins bonus packs the best work of the grand illusionist as the payout system assumes the cascading wins style.

Those who aren't familiar with cascading reels, it's basically when winning outcomes disappear from the reel set and the empty positions are replaced by new symbols. This is my favourite part of the game. I didn't expect the conversion and I was glad that I played True Illusions because of it. I think this is where the big win potential is hidden and I got a taste of it.

I should clarify a few details about the bets and credits part of the game. 2011 was a time when Betsoft made games in a similar graphic style and marked the wagers in credits instead of currency. So if you are playing a penny as the payline bet and make a single Bet Per Line choice on 30 paylines, the total bet is going to be 30p per spin. Thankfully, the balance is shown both in currency and credits so you can track your expenditure and your gains as you go.

True Illusions has an RTP that is above the 96% average, so in that regard, 96.62% sounds decent to me. The machine's volatility is medium and you can feel it in the winning outcomes - they tend to waver between small and few times the bet amount for the most part, with only a few big wins in the base game. On the other hand, I'd felt that True Illusions has a good model that rewards winning outcomes rather frequently.

Halfway during the gameplay I realised that True Illusions is a game that isn’t likely to trigger a really big win. The graphics can be entertaining and that is part of the enjoyment of playing the game, but I think you’d have to play for a while before you get a win between 50x and 100x your bet. Overall, it’s a nice little game to try but I know that it isn’t going to cross my mind again because there are more recent Betsoft games that are far better.

Browse casinos with True Illusions and other slots from Betsoft. Create an account and try the game for free before making a deposit.

You can play True Illusions in English, Finnish, Swedish, German and 21 other languages. 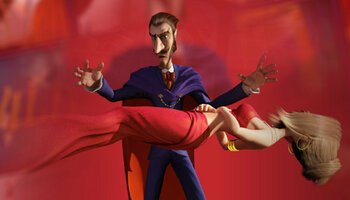