The only place where you can see Putin do the headbangers’ gesture and Trump wear a jester's hat is in a parallel universe, or the Trump It slot.

Hillary Clinton appears frazzled and Barack Obama is dazed and confused. It looks like the slots makers at Fugaso have a good sense of humour in making these global movers and shakers appear to be past their best form.

But as much as the game can be entertaining it can also be engaging. Trump It has multiplier wilds, a free spins bonus and a set of symbols that can pay handsome amounts. These highlights can come to the fore during the free spins bonus and trigger better wins because of one extra detail that is there to give a boost to any winning outcome.

As I was playing the game I thought that another payout system would have been a better fit for its character. Happy to say it, my machinations had been answered by Fugaso a few months later, and I will get to that part soon enough.

Trump It is one Fugaso's progressive jackpot slots, so players can expect a lower return to player percentage in exchange for the possibility of winning a potentially stupendous prize.

Slot players who don't care a tiny bit about international affairs and G8 summits may not find the game as enticing. That's understandable. You don't want to relate to the characters on the screen, but on the other hand, without humour, the world of politics would be dreadful.

Hence, Fugaso made Trump It and had it included in the network of progressive slots, just in case one chooses to drop out of nowhere as you are marvelling at Obama's appearance.

This slots adventure takes us on the south lawn in front of the White House. It is obvious that the person in the main role is US President Donald Trump, as he's been made to be the game's joker, that is, the wild symbol. Whether intentionally or not... well, nevermind, only Fugaso knows.

The symbols have been drawn and painted to appear as caricatures, which adds to the ‘funny’ factor. The world leaders' big heads, small bodies and comical countenances make them appear a lot less 'statesmen-ly' than what they usually appear like when speaking from behind the teleprompter.

In summary, Trump It isn't wildly original but it’s made well enough to provide a smooth and fun-loving slots experience. The quality of the graphic design is decent enough, but it is the animated bits that can provoke a chuckle or two until you've seen it all.

I like how Fugaso had thought up the bonus feature. Players are used to seeing free spins bonuses being triggered with scatter symbols, so this, for me at least, is a novelty and the concept is pretty straightforward - score cash, score free spins.

I can find no specs on the payout structure. Expectedly, the amounts that you can make for three matching symbols are small, but anything above that in the group of high-paying leaders is top buck.

Needless to say, these payouts are top-notch. The low-paying TRUMP letters draped in the American flag aren't half bad either, if you get to see more four and five-symbol payouts opposed to payouts for three.

If anyone is iffy about playing the progressive jackpot Trump It slot with a theoretical RTP of 91.44% plus 4.5% that is added in case of winning either of the jackpot prizes, the way to go is trying it out with a number of spins at 15p each, as the game permits.

This will give you a sense of the medium to high variance and a feel of the free spins bonus that can make wild wins 4x the payout times your bet. To me, this sounds quite welcoming.

I said something about 15 paylines not being my preferred payout system for this game. Well, in the meantime Fugaso has released another version of Trump It, called Deluxe and another one with the EpicWays system. Now players have more than one choice to play with the likes of Trump, Putin and Kim Jong Un.

Play Trump It for free

Browse casinos with Trump It and other slots from Fugaso. Create an account and try the game for free before making a deposit.

You can play Trump It in English, Swedish, German, French and 7 other languages. 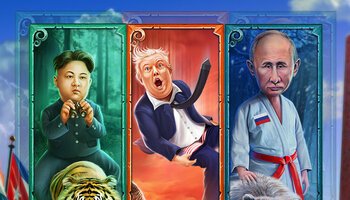