Turning Totems is a slot that revolves literally around totems standing somewhere in the American prairie while a Native American watches. The slot includes paylines from both sides, wilds and free spins amongst other features for the player.

Perhaps suitably this game was developed and released by Thunderkick in 2016, their name at least implying some sort of connection to the North-American cultures that spawned the totems. The game is built around a 5-reel, 3-row playing field that is designed to resemble 5 individual totems with spinning tiles. We can easily see that the different totems are placed somewhere in the prairie while different weather effects change their look.

The whole game looks great with a cute cartoon look even though it is made by using 3D graphics. We can see that there is a slow evolution of the technology happening comparing it to slots that were released only a few years earlier. There is a Native American standing in the corner and even though they’re slightly animated they don’t react much to the game. Even wins on one of the 11 paylines don’t garner much of a response.

As far as the sound design goes, I thought it was fine if somewhat lacking. There is very faint music that can be heard which sounds like Native American music but it is soft and barely there. Meanwhile, the sound effects are a bit more prominent but they don’t feel like they’re really a part of the setting.

Turning Totems is entirely built around the appearance of 5 totems with the different rows being separate parts of each totem. As a result, all the symbols are made to look like they’re part of a totem. In this case, it means we have a number of colourful faces from both animals and people. Through the use of colour and exaggerated shapes, we are able to tell them apart easily.

The game has Medium Volatility and a max. win of 999x your bet. This is low for a slot, especially with this volatility. I found the game to be quite forward with handing out wins, however, and I spent most of my time on the positives but this didn’t increase over time. Instead, I would get a tidy win and when that had dwindled away to my starting point I would get another tidy win. Obviously, this isn’t a guarantee for other play sessions.

Players are able to augment their bets like they are in any other slot. This game allows players to pick a bet between £0.10 and £100 per spin. I started off with a normal-sized bet and increased it over time as I got a better grasp at the game. However, there can be quite some time between wins and as such having big bets will not be a smart move.

Although the appearance of the slot is interesting I didn’t think the features really added much to the overall experience. They do their job well and help players to get wins but there wasn’t quite enough to keep me engaged for a longer period of time. The Wilds and Free Spins function largely as you would expect even when they’re made to look somewhat different.

The biggest change to the formula was the Thunder Snakes. These appear on random reels and will turn the entire reel into a Thunder Reel. When that happens, any dormant Wilds on there will be activated and become active Wilds. Dormant Wilds barely offer any payout while the active Wilds are the most profitable.

Because of that, it can be quite frustrating to see an entire playing field filled with dormant Wilds but no Thunder Snakes to activate them. As a result, players will walk away with barely enough to fund the next spin.

The free spins mode is activated whenever 3 reels are turned into Thunder Reels. This can happen randomly and in my experience won’t happen very often. When it does, the game will show rain and lightning in the distance. The game mode itself can be lucrative and add bigger wins but that’s very dependent on the Wilds appearing on the screen.

Turning Totems is a very nice-looking slot that takes a familiar concept and makes it something that meshes seamlessly with the classic video slot gameplay. There is a lot of attention to detail which brings the idea to life. I do wish the sound had been given a more prominent role.

The features are fine but not especially interesting or intriguing. They mostly do what any basic slot does but with a little different set dressing. This does mean the game is ideal for players who enjoy simple video slots but with modern graphics.

If you’re a power player you might be interested in the jackpot. This game offers a max. win of 999x your bet which is low compared to other slots with a similar volatility, but about average for Thunderkick slots.

Browse casinos with Turning Totems and other slots from Thunderkick. Create an account and try the game for free before making a deposit.

You can play Turning Totems in English, Finnish, Swedish, Norwegian 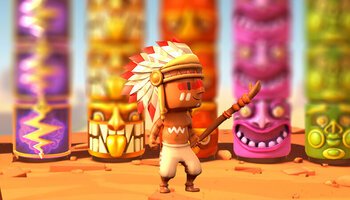