Tut’s Twister brings us deep into the catacombs of Tutankhamun’s burial chambers in an attempt to loot them, only to be faced by his mummified remains!

The slot comes with a rather standard 5-reel, 4-row playing field that houses 25 paylines. The game was developed by Yggdrasil and released in 2018, which explains the truly excellent graphics. As the title probably gives away, the slot is set in Egypt where the player is presented with Tutankhamun’s tomb.

I found the introduction cinematic to be a good representation of the slot, showing us Tut, as we’ll call him, show up in a swirling twister. The rest of the game has the same high fidelity with a beautiful background, high-definition symbols and even Tutankhamun in all his glory.

I liked his appearance the most, even though he doesn’t do much. He mostly stands in the corner looking ominous but sometimes he turns into Tut’s Twister as a Stacked Wild on one of the reels. I thought that was a clever way to tie him into the actual gameplay.

The sound was rather odd. Although it started sounding Egyptian it quickly became more modern and lost that connection with the slot. The different victory tunes also didn’t fit the theme and made the game sound a lot more whimsical than it presented itself as.

The symbols in the game were nice to look at but unfortunately, the low-paying symbols were quite simple and static. The Wild symbol was animated while the other symbols were all rather static except for a simple movement when they’re part of a winning payline.

I thought the 4 high-paying symbols were nice to look at but with only 4 it made it harder to give the game at large some real depth. They could have used the low-paying symbols to flesh that out a little bit more, but using card suits made that impossible. It was mostly a wasted opportunity in my eyes.

The features in the game were pretty clear but I did find the game had some trouble making them clear. I had to dive into the paytable to figure out exactly how they worked. In short, these are the different features:

As you can probably tell, the Twister Feature was a focal point of the slot and most of the features hinged on it. The Wilds appeared regularly enough to add some value as well but since you only need 2 on the screen to activate the Twister Feature, it activated quite a lot for me.

One additional thing I have to mention are the hieroglyphs at the top of the reels. Each reel has a number of different hieroglyphs. When there is a Wild on that reel, the Wild picks a random perk:

Reels 1 and 5 have 3 glyphs, reels 2 and 4 have 4 glyphs and reel 3 have 5 glyphs. When I managed to get all the right glyphs on the right reel, the game started the Twister Feature and added a Wild to the screen for every glyph on that reel. This could result in having multiple Walking Wilds on the screen at the same time and often resulted in big wins.

I should mention that there is an incredible amount of randomness associated with this. Every reel had its own glyphs and when a Wild showed up on a reel, it could have different awards as mentioned above. Even when it picked a glyph it had to be the one correct glyph for that reel to count. It made it incredibly unlikely for it to show up and then there had to be multiple glyphs matched on a reel as well!

I liked the Twister Feature itself although it was quite difficult to understand how it worked from just watching it. The important things to remember are that Wilds added to the reels are Walking Wilds and trigger Re-spins, and that the Walking Wilds are drawn towards the Stacked Wild and don’t necessarily move to the left as is usually the case.

Walking Wilds added themselves to the Stacked Wild and once the game ran out of re-spins it would distribute these Wilds for one last spin to see if it resulted in any wins before returning to the base game.

The game lists a Medium Volatility but that did not fit my experience, I would have listed it as high volatility due to the high randomness of getting any of the special features. Picking a lower bet between £0.10 and £100 was quite lucrative while choosing higher bets depleted my funds quickly. It’s up to each player to decide how to play it.

Tut’s Twister is another Egyptian slot that Yggdrasil released not too long ago. Valley of the Gods is another good example of their fascination with this time period. Although they do manage to make attractive slots out of them, I wonder if it’s enough to set them apart. When looking at a slot like NetEnt’s Lost Relics, they take the same premise but turn it into something really unique and memorable. I kind of missed that here.

Of course, since it’s a Yggdrasil slot it is still a good game with a set of interesting features. I thought the Twister Feature was integrated well within the setting of the slot but might have been a little too much.

Browse casinos with Tut's Twister and other slots from Yggdrasil. Create an account and try the game for free before making a deposit.

You can play Tut's Twister in English, Finnish, Swedish, German and 18 other languages. 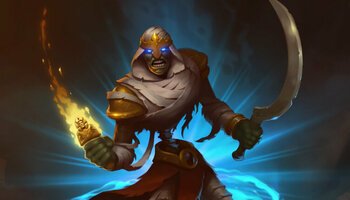