Twin Spin Deluxe has been removed from NetEnt's game library in February 2021.

The original Twin Spin slot was a classic one-armed bandit slot game that although it delighted a range of old-school players, it failed to impress many others (including myself). Since it lacked staple features most prominently found across modern slot games, it appears that this game has been given another shot. Software provider Net Entertainment seems to have learned from its past mistakes, and rectified the original yet sloppy Twin Spin slot game and given it a complete overhaul.

Although its predecessor had a simple concept and the potential to reward players with massive wins, it failed to move a large portion of players due to lack of features.

When I first opened this game, I was a bit confused as it looked like the classic Tetris game but with fruit machine symbols. Overall, the latest version of Twin Spin enjoys the same funky soundtrack along with the same symbols. Instead of the 70s groovy music, you instead find yourself sitting in an arcade sometime in the 80s. Somehow, this threw me off by surprise, as the theme seems to work really well. As the background moves backwards, you can feel yourself being sucked in. Clever trick!

Twin Spin Deluxe is built over a rather large 6x5 reel with no pay lines. So how does it work, you might ponder? The only way to achieve a win is to get nine symbols touching each other. Better known as ‘cluster pay’, you can also spot the same concept in sister slot game Aloha Cluster Pays.

This exciting concept which replaces pay lines with cluster pays has added a much-needed touch to a game that was previously devoid of unique features. I find one-armed bandits/fruit machines not quite as enticing, but this game has piqued my interest.

Since it is also a mid-variance game with speedy action, it actually had me sitting on the edge of my seat. May I also remind you that this game can see you win 1,000x your bet. Don’t let this fool you into thinking that it can be easily achieved. The road to the top is a tough one, albeit not impossible. I have seen and experienced big wins with low paying symbols.

In terms of graphics, NetEnt hardly ever disappoints. The same goes for Twin Spin Deluxe which has neon-bright coloured symbols that are reminiscent of the 80s. I quite like the graphics. I’m just not too keen on the background music, which is a bit like finding yourself at an Ibiza nightclub after downing a few pints. If anything, I found the music less than immersive and more distracting.

Let’s get started with the features. As you know by now, the only way to achieve a win in this game is by getting 9 or more of the same symbol next to each other, in the shape and form of a cluster. A cluster can only be formed only if a symbol appears vertically or horizontally adjacent to the same value.

With a neon-light finish, the symbols include playing cards, which as usual are the lowest-paying symbols, and cherries, bars, red 7s, bells and blue diamonds which are the highest paying symbols. The bells and the cherries can pay you up to 250x your bet, while the bars and the red 7s can give you a whopping 500x your bet. Out of all the symbols, the most valuable one is the blue diamond. Land yourself 30 of these in a cluster to receive 1,000x your bet.

Like its predecessor, this game also features the Twin Reel feature where every single spin kicks off with similar and adjacent reels linked together. These can further expand to take over up to six linked adjacent reels. And you know what that means! If they all show the same symbols, it means that the clusters will be bigger and better than regular ones.

Both the former and the latter game enjoy the same concept, except the Deluxe version, which also possesses an extra reel.

Both the Cluster Pays and the Twin Reel features are quite effective in facilitating wins. Still, since this is a medium to high variance game, I found myself getting incredibly frustrated when I landed a different symbol. So close, yet so far.

Although Twin Spin Deluxe was a step forward in the right direction, the medium to high variance can put a damper on players who have a smaller bankroll. You can go through long spells without hitting a winning cluster.

That being said, for those of you who are fans of games such as Viking Runecraft and Gemix, the move to big clusters from pay lines is welcomed with open arms.

I’m still not sure how I feel about this game. I feel torn as players who love simple games will pile on the love on this game, but at the same time might find the cluster move a tad confuzzling. On the other hand, players who like complicated slot games might find this game a little dry.

What I do suggest is that you have a set budget in place for this game. Since this is a relatively volatile game, you might be heading in for a long ride without any wins. If you are a noob, you might want to take care of your cash, before diving all in.

Browse casinos with Twin Spin Deluxe and other slots from NetEnt. Create an account and try the game for free before making a deposit.

You can play Twin Spin Deluxe in English, Finnish, Swedish, German and 20 other languages. 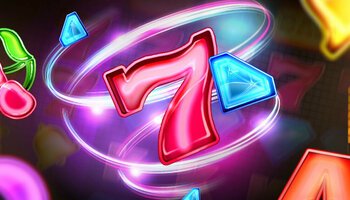