Twin Spin Megaways is pushing the limits on how many great features a single game can have. This is a game to behold.

Twin Spin has been a popular game and NetEnt has really milked it for all its worth. The first version of the slot was released in 2013, the Deluxe version came out in 2018 and 2020 is the year of the Megaways version.

Megaways games have been a big thing lately and the developers have noticed this. They are all licensing the feature and pushing out new games one after the other. NetEnt for example has made a Megaways version of Piggy Riches, Gonzo’s Quest and Divine Fortune.

So, what is Megaways? If you haven’t yet played any of the increasing amount of Megaways slots, then here is the quick rundown. The game has a varying amount of symbols on each reel and every possible payline is used. You can have up to 117,649 active lines and the more you have, the better it is.

Twin Spin Megaways is a souped-up version of the original slot. It shares the same visual style and even the same music. You could just look at this game and see it as just an updated version.

Twin Spin is all about that classic Vegas-styled slot with a modern twist. The game is bright, shiny and colourful, which means it is easy to play and easy on the eyes. The slot looked good in 2013 and it still looks good in 2020.

Like I mentioned, the sounds are also taken mainly from the original slot. There are some exceptions and improvements, like the sound the reels make when they stop. The original had a harsh machine-like sound and the new one has a soft, more pleasant sound.

There aren’t many changes compared to the original Twin Spin, as there wasn’t much need for them. I do like that the sounds have been softened up, which makes the game much more mellow. This is not a mechanical slot and it doesn’t need to sound like one.

All the familiar symbols are here. If you have played a previous version of Twin Spin, or just know your classic Vegas slots, you know what to expect. Cherries, sevens, bars, diamonds and so on; they are all right here.

There are a total of ten regular symbols, five card numbers and five picture symbols. There is a fairly big difference between them when it comes to wins, so you absolutely want to hit those high-tier ones. There are also two special symbols, a wild and a scatter. The wild can even show up with a 2x or 3x multiplier.

The scatter symbols can activate the Free Spin feature. You need at least five scatters and each additional one will increase the amount of spins. This is not an easy task, so enjoy the free spins if you manage to get them. It took me ages to activate them for the first time, which seems to be a common thing in Megaways games.

If you look at the paytable, you might be a bit shocked to see how low all the wins are. This is because the game mechanics, which are designed so that you can hit multiple wins with a single spin. First, there is the Megaways mechanic, which gives you a ton of symbols on the board and enough paylines to win all ways. Then there is the Cascading Wins mechanic, which cascades wins one after another.

This is a high-volatility slot with no middle ground. A single spin can be worth a ton if the right symbols start to cascade. Better yet, activate the free spins and you are in for a treat.

Megaways is a fantastic feature that causes a nice bit of variance to the game. At the start of every spin, you get a random amount of symbols on each reel. There can be anything between 2 and 7 symbols on each of them and the more there are, the better it is for you. The game then counts every possible combination and shows you the number of paylines for that spin as the Megaways number. It can be as low as 64 or as high as 117,649 paylines.

At the start of each spin, at least two adjacent reels somewhere on the playfield are linked together. These Twin Reels then get the exact same symbols on each of them. This feature is at its best when the first two or even three reels are linked.

Winning is great, but what if you could win multiple times with just one spin? This is where Cascading Wins comes in. Every time you win, the game removes those symbols from the reels and new ones fall down to fill the gaps. These symbols can then make new winning combinations and cause new cascades.

The free spins have two little improvements over the regular spins. All the Twin Reels will always have the maximum amount of symbols on them and you get multiplier wilds added to the mix. They have a nice 2x or 3x multiplier attached to them.

Twin Spin for me was always a nice game, but not something I would actively choose to play. It’s just like Starburst: nice, but not interesting enough. Especially when we have seen a version of the classic Vegas machine with a modern twist from every developer.

I just kept wondering if this version of Twin Spin brings enough new to the table. It looks and sounds like the first one and the Deluxe version had a larger playfield as well.

When I started playing Twin Spin Megaways, I quickly found out that this is actually a pretty good slot. It has a bunch of good mechanics that play well together. We have already seen that Cascading Wins is a good feature in these, but so is the Twin Reels mechanic.

I do need to point out, that at this point the Megaways feature alone is enough to make a slot good. Maybe after a few years, I might change my mind when there are a lot more Megaways games, but for now, I’ll happily try out every new Megaways slot.

Browse casinos with Twin Spin™ Megaways™ and other slots from NetEnt. Create an account and try the game for free before making a deposit.

You can play Twin Spin™ Megaways™ in English, Finnish, Swedish, German and 20 other languages. 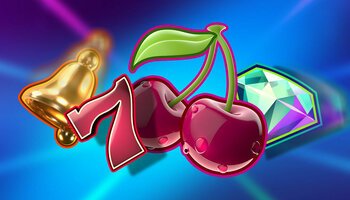