Oof! With the rhythm bouncing off the reels, Twin Spin is a NetEnt classic slot-spectacular spread over five reels and with a whopping 243 ways to win. With a far-out soundtrack belting in the background, you might require some shades for that extra cool factor.

But let’s throw our focus back on the game on offer. At face value, this looks like another Starburst/ fruit machine with some updated graphics to give it that newness feeling. I’m not trying to pile the hate on software provider Net Entertainment. Seriously, I’m not. I just love the slot games they offer, more so in the early years than in the latter.

But I need to say it as it is. Twin Spin looks very basic, and it brings back memories of Starburst. The slot games look identical, with crisp visuals and striking symbols. There is nothing enticing in place, like bonus games. In fact, I’m quite surprised Netent released this game at the height of its career. It’s the type of slot game you would find in Vegas, but with no thrilling features, there is very little to boast about.

As far as games go, this is as basic as they come, with one single bonus feature going for it. When you first load up the game, it comes across as shiny and new, but once you start playing it, it loses its lustre very quickly. When I first opened it, I was quite thrilled, but once I started playing it, I found myself lost for words.

With its roots firmly in the classic one-armed bandit style, the symbols on offer here are familiar for anyone who has ever laid eyes on a fruit machine. You can find all the usual symbols, including A to 9 playing cards, bells, bars, cherries and lucky 7s. The most rewarding symbol out of them all is the diamond, which can reward you with a monstrous 1,000 coins should you land five of a kind on a pay line.

Luckily for us, there is also a wild in place. When it lands on any of the middle three reels, it can help substitute for other symbols in a bid to create a winning combination. Bear in mind that there are 243 ways to win in this game, meaning that combos are principally created by getting matching symbols on at least three adjacent reels, starting from the left.

To do so, there is the Twin Reel Feature. On every spin, two adjacent symbols are randomly chosen and will comprise the same icons on that very spin. Things are shaken up and take an interesting twist when the Twin Reels expand, which in turn can transform between three and five reels into matches, delivering some great results.

This is the one major let-down of the game. Since it lacks a staple game feature, you won’t find any free spins or other traditional bonus rounds. The game focuses on the base gameplay and just the Twin Reels feature.

I’m afraid if you are looking for a game with all the bells and whistles of modern video slots, Twin Reels just isn’t for you. I quite enjoyed that this one-armed bandit was given a modern makeover, but in terms of features, it fell short and flat. I found this game to be quite easily forgettable and can see players from all walks of life getting disappointed over time.

Since it doesn’t quite captivate your attention, I noticed that you could easily go through long spells with near misses, leading to miserable frustration. The variance here is set between medium to high, so you can imagine how my patience quickly ran out. I recommend that you have a set budget in place if you are aiming at playing this game. If you are a low roller, this game could deplete your bankroll much quicker. Perhaps, try the subsequent version of this game.

If you are looking for a little upgrade and perhaps with more quality entertainment, I recommend you try Twin Spin Deluxe, which boasts more features.

Browse casinos with Twin Spin and other slots from NetEnt. Create an account and try the game for free before making a deposit.

You can play Twin Spin in English, Finnish, Swedish, German and 20 other languages. 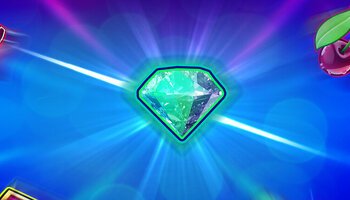