Tycoons shows us the hard life of some industry titans who run what seems to be the world, or at least some very successful companies. Players are kept engaged with a bonus game, free spins, wilds and multipliers.

This game, developed by Betsoft and released in 2011, is one where flaunting your wealth is seen as a good thing. That’s why players are treated to a collection of symbols depicting not only the various tycoons but also the results of their hard work. All of this is done in 3D as was the style at the time of this game’s release. The graphics actually hold out pretty well, looking clean and sharp if a little flat.

The player is going to play on a 5-reel, 3-row playing field with the usual 30 paylines to get a win on. Anytime they do get a win the tiles involved will be enlarged and the winning payline shown on the screen. It’s all pretty simple but at the same time, it works well so why change a winning formula?

Speaking of winning, the game has Medium Volatility which in my experience meant that I would be treated to some average wins pretty frequently. Bigger wins that really boosted my funds were a lot less frequent and as a result, my funds continued to drop slowly over time. It felt very average to me, with the gameplay being somewhat basic when compared to newer slots.

Tycoons has a number of unique symbols to fill the reels with, including obviously a number of different tycoons. These are all distinct from each other in their appearance but it’s not clear by looking at them which ones are the most valuable. To make it easier, I’ve added a list of the symbols from most to least valuable below here.

The player can adjust their bet according to their own preference. The slot allows bets between £0.10 and £150 per spin which is obviously about the average for most games. It means that high rollers will be able to get the most of their wins while the casual player can lower their bets and use their funds to play with for a longer period of time.

When it comes to being rewarded, this slot has a staggering max. win of 1,417,500x your bet. Obviously, this is only a theoretical number and it’s not anything that will be actually hit by anyone. Instead, players should focus their efforts on the progressive jackpot that starts off at 5.000x your bet. Also a nice win of course, but not as grandiose as the maximum win.

The symbols in the game include, from most to least important:

Tycoons has a number of special features included in the game but these are mostly not triggered through any separate symbol. Instead, the features are integrated into the other elements of the game.

Although this might seem rather complicated, a lot of it is integrated into the gameplay in such a way that the player doesn’t really have to do anything. There are two features, the coin win and the bonus round, where the player has to make a selection to decide the size of their win. The free spins mode is activated organically when playing the game.

I never managed to hit the jackpot but even that feature does not require the player to activate any special parts of the game. Where other slots hide the jackpot behind the free spins mode or a bonus game, Tycoons makes it possible to win it just by playing in the base game which is something I liked. The main downside is that you are required to play at the maximum bet, which will drain the funds for most people very quickly and I wouldn’t recommend it.

Tycoons is an older slot made by a big studio that actually held up pretty well compared to other slots released around that time. Even looking at other Betsoft slots from that time, Tycoons looks amazing when put next to those. It means that players who enjoy attractive slots will likely want to give this game a try as well.

As far as the gameplay goes, I thought it was pretty standard. The different features do their best to spice up the game but they are rather difficult to activate which meant I was looking at the base game for most of my time trying it out. The free spins mode only activated once, while the different bonus game only showed themselves a handful of times each.

In the end, I noticed a steady drop in my funds without ever really feeling like I had a chance at recovering those losses. It was an entertainable enough game for the time that I tried it but I don’t think it quite offers the gameplay to encourage a return.

Browse casinos with Tycoons and other slots from Betsoft. Create an account and try the game for free before making a deposit.

You can play Tycoons in English, Finnish, Swedish, German and 22 other languages. 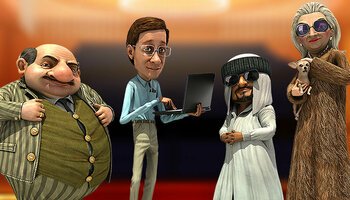