Push Gaming has inched dangerously close to making the three football stars of the banner resemble their real-life counterparts. Pushing limits can be fun and that's why they are named Push Gaming, but you really don't want Cristiano Ronaldo knocking on your door with a litigation letter.

I don't know if it's just me or is the player in the middle a more studly version of Wayne Rooney?! And is that a digital Zlatan Ibrahimovic look-alike, but with a short, blonde hair? You already know that this is all about football, or soccer and regardless of whether you are a fan of the game or someone who casually neglects its existence, Ultimate Dream Team is one of the more decent football-themed slots I've ever played.

At first, I thought Push Gaming has simply used football imagery to place on the reels as symbols and call this a slot game about football, but that is not the case. Ultimate Dream Team comes with a set of decent extra features, a solid paytable and a traditional layout of three rows and five reels. Although the graphics are not that spectacular I enjoyed playing the game and had returned to it a few times during the Euro football cup in 2016, as the period was hot for all things football.

Push Gaming has decided for their signature style of square, blocky symbols for this game and to a good effect. The famous footballer lookalikes from the game's banner are kept company on the reel set by someone who poorly resembles Joe Hart (of the Man City fame) and a very good rendition of the legendary Ronaldinho.

When making a football-themed slot, providers can either go awfully south or painfully generic in terms of graphic design. Push Gaming has somehow succeeded in creating a convincing game that football fans among the slots players are likely to notice. I personally didn't mind the lack of animation surrounding the winning outcomes because the game has some dynamic visual effects in place.

Overall, I found the graphics on Ultimate Dream Team quite alright and my impression was positively impacted by the light electronic track and football stadium ambiance. All of this has been done in good balance so players can simply play away and not even mind the music and the flow of visual effects.

Push Gaming has found an amusing way of how to relate the bonus features to the game of football, as well as to the game of Football Fantasy and all of the anxious armchair managers around the world.

The paytable structure reflects values that are multiplied by the payline bet. The most valuable symbols are the wild and the stacked top symbol. Both can pay for only two of a kind on a payline (20x) which is not the case for the remaining symbols. If you land three, four and five of the same kind on a payline the Ultimate Dream Team slot will pay you 150x, 400x and 800x your payline bet.

Now, regardless of how much I enjoyed the extra features, I've realized that I never got a single winning outcome that involved more than three of either of these symbols. The prizes are a lot heftier if you get four or five of a kind, but that's just left up to the medium/high math model to decide.

Landing wins comprised of the royal cards' symbols is meant to prevent your balance from making big drops while in anticipation of either of the bonus features to trigger. The payouts are nothing special, really on the verge of painfully low if you consider the 2x and 5x your payline bet for three card symbols. Four of a kind are somewhat better, but still, not good enough to return your stake.

On the other hand, I've had numerous winning outcomes paid for the football players. These can range between 5x and 400x your payline bet. As you can see, the paytable is split right down the middle. Winning outcomes consisting of three of a kind are worth peanuts but don't get angry at the ref because your team can redeem itself both during the penalty kicks and during the transfer period.

I really liked playing Ultimate Dream Team, both because of the graphics and the gameplay and because I find the set of data quite positive: medium to high variance, 96.50% RTP and a maximum potential payout of 1418x your bet. Overall, the game plays like a well-made online slot, no-frills, just thrills, and I highly recommend it for that.

Browse casinos with Ultimate Dream Team and other slots from Push Gaming. Create an account and try the game for free before making a deposit.

You can play Ultimate Dream Team in English, Finnish, Swedish, German and 16 other languages. 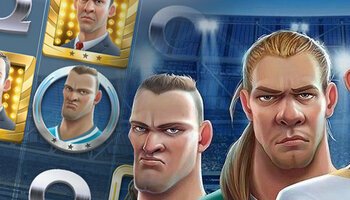