Under the Bed slot review

Play Under the Bed

Paranormal phenomena are in abundance in Under the Bed by Betsoft, including winning outcomes of up to 700x your bet.

The game caught my attention a while ago with its bizarre theme and graphics. I found it easy to relate to the story of little siblings imagining monsters where there aren’t. An overactive imagination can do that to children and Betsoft has struck the right notes in that regard.

In terms of gameplay and features, Under the Bed can offer a few interesting elements that the player can benefit from. First off, the standard layout of three rows and five reels spins across 30 paylines.

In this case, more means better because one of the features is Sticky Wilds that can substitute on one or more paylines. The monsters' symbols are not there just for show either. Besides being the high-paying symbols, they can also convert into one or more Sticky Wilds.

One of the features that are standard in most Betsoft games from this period (the 2010s) is the so-called "Double Up" or gamble feature that lets you expand your winning outcomes in a simple hit-or-miss game.

The graphic design has Betsoft all over it. Take any game made by this company between 2010 and 2015 and you will find a similar style of drawing and rendering of the symbols.

In other words, you will find a lively cast of characters that are fully animated when they become part of a winning payline.

If you ask me, these monsters look kind of friendly but they are determined to freak out the little children in the game - which produces a funny visual skit for each monster.

In terms of sound design, Betsoft has treated every action to a corresponding sound effect. The soundtrack itself is pretty OK, but in my experience, the whimpering gets kind of annoying so I turn off the sound FX from the settings.

Overall, the graphics are definitely entertaining, even if the premise is not your cup of tea.

The thing that I like about games by Betsoft is that a great number of them come with default win multipliers in the free spins bonus. Under the Bed is one of those games, so that's a huge plus to go along with the sticky wilds.

Even if you do have to bide your time for the free spins bonus, the base game gets the benefit of monster symbols converting into wilds. This feature gives you a fighting chance for landing a big win thanks to the potential duration of the feature.

Any monster symbol that connects in a winning payline can result in a sticky wild. You'll know that the feature has triggered when you see the golden frame around the lucky symbol.

In the event, the special symbol will reveal a random number, usually between 1 and 5, which determines how many spins the Wild will remain active for.

As I said, the sticky Wilds are part of the free spins bonus, which is where the game keeps most of its big-win potential.

To trigger the bonus you only need one symbol to land on the centre position of the reel set. The special symbol is a door that opens up and pulls you inside in a cool visual effect.

The free spins bonus comes with a default 2x win multiplier on all winning outcomes, including those that were helped by the sticky Wilds.

Betsoft likes to include pick-me bonus games in their slots and Under the Bed is no exception. You need three of the bed symbols to trigger the game that puts you inside the bedroom with the monsters.

Picking a card reveals one of the monsters, which lands on the bed and scares the children. That's too bad, but you do get a cash prize for every monster until you reveal the Collect symbol.

Worry not about the siblings, their parents are nearby to comfort them.

You can play the game on a single payline if you want because the paylines are selectable.

This option makes it a penny-slot, really, but you'd be missing out on potential winning outcomes if you don't play on the full 30 lines, or at least 20.

Coin values range between 1p and £1.00 and there are five bet levels, which multiply your total bet by that number.

The paytable structure is rather amusing. You get the standard low payouts for three matching symbols, but these do improve in value as you cross the middle divide of the paytable.

The best values are for the sister symbol - between 125x and 500x your payline bet, which is rather decent. I thought the small payouts for the first five symbols are kind of off-putting, but then there is the Sticky Wild feature that can easily change that.

Payout values for each symbol are as follows:

Under the Bed is a fun game to play in view of the premise and graphic design. When it comes to the nitty-gritty details, I think Betsoft has nailed this one on the head.

The game has a decent payouts structure and features that can boost any winning outcome. A medium variance doesn’t constrain the payout mechanics from throwing in five symbol wins, including those consisting of high-paying symbols.

Overall, I’d recommend the game to anyone and don’t worry about the childish theme. I do concede that thrill-seekers may find the 700x max win potential to be kind of low. Nevertheless, the game is beyond that.

Play Under the Bed for free

Browse casinos with Under the Bed and other slots from Betsoft. Create an account and try the game for free before making a deposit.

You can play Under the Bed in English, Finnish, Swedish, German and 22 other languages. 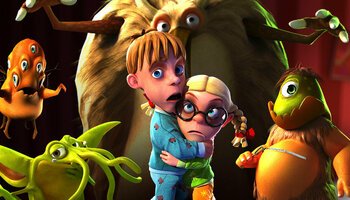