Urartu takes place in an ancient, mystical empire that existed in what is now Armenia. The game is filled with items and characters recovered from this classical civilization along with Free Spins, Wilds and Multipliers.

The game was released in 2014 by developer Endorphina, who has created a series of slots focused around the idea of ancient cultures. Urartu is one that is based on an ancient civilization that is mentioned in the bible. Currently, the kingdom is part of Armenia. Even though this empire has faded into obscurity over the centuries there are still a lot of archaeological finds that have enabled the creators of the slot to fill the 5-reel, 3-row slot with interesting images.

The high-paying symbols are all original art designed specifically for this slot. When they’re a part of one of the 10 paylines the game has them slightly animated. It wasn’t much but I liked that they made the effort. Unfortunately, the low-paying symbols are simple card letters which don’t fit the theme at all.

When it comes to the sound, it seems like the creators didn’t really know what to do with the theme. If you get a win it will play a quick Middle-Eastern sounding jingle but besides that, the game is silent when it comes to music. There are some sound effects that are related to the game itself, with the reels ticking in place but that’s all.

The symbols in Urartu look alright. I liked that the developers took an unfamiliar concept and made it the topic of a game. The high-paying symbols in the game are related to classical finds of the era, with different characters wearing appropriate clothes, examples of Urartu armour, as well as different icons and emblems.

Whenever there is a win the symbols that are part of the win line light up, although I did think it was rather hard to tell with the card letters. The slot uses a lot of gold and stone as its colours, and the payline is lit up with a gold rim which is rather tricky to spot. I did like that a lot of the symbols are animated as well.

With so many different symbols and not a lot of ways to increase the likelihood of a win, the game rightly has a High Volatility. During my time playing, I found wins to be sparse and often not very high. The main area where bigger wins were likely was during the free spins mode. The max. win is 1,500x your bet, which I would consider a nice jackpot but not as high as other Endorphina slots offer.

Urartu is a simple slot when it comes to features. Other Endorphina slots like Undine’s Deep and The Vampires have largely the same ones. It means that you can test out the selection with this game, but don’t be afraid of moving on to one of their other slots if this game doesn’t click for you.

With its multiplier feature enabled, it quickly became clear to me the Free Spins mode was the main way of getting big wins. Unfortunately, I found it to be very hard to trigger. I played the game for over an hour but only saw it appear twice. This is in stark contrast with a game like The Vampires which had the free spins mode semi-regularly.

To balance it out, the multiplier that is active during the Free Spins mode is bigger in this slot than in the other Endorphina games I’ve played. It’s something to keep in mind, especially for people that enjoy high volatility slots. The Free Spins mode is really the exclamation mark of this game. Playing for long enough should see you make a return on investment.

If you’re so inclined, you can choose a bet between £0.01 and £100 per spin. I always advise people to start off with some low bets to get a feel of the slot before deciding to increase them. Especially with a volatile game such as Urartu, it’s better to err on the side of caution.

Urartu is a slot that mostly gets points for being original. I never heard of this culture before, although I did recognise some of the iconography and armour used in this slot. I think it’s always a nice thing when a slot is set in a historic setting that isn’t Egypt or Aztec.

The small number of features made it a rather dull exercise for me when it came to the gameplay. There aren’t a lot of features and the ones that do exist don’t trigger often at all. Even the Wilds were rare to show up. In my experience, I found my funds to drop down steadily without ever really recovering.

Players that enjoy a simple slot with some obvious gameplay choices might get something out of Urartu. Because of its age, I would recommend giving it a pass and looking towards newer slots, either created by Endorphina or other developers.

Browse casinos with Urartu and other slots from Endorphina. Create an account and try the game for free before making a deposit.

You can play Urartu in English 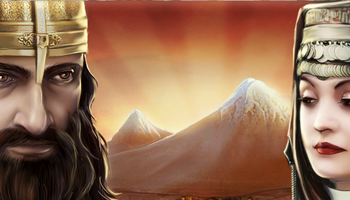