Valley of Pharaohs is set deep inside the heartland of Egypt where, in antiquity, the leaders of the empire were buried in extravagant burial chambers underneath enormous pyramids. Surely, there is more than meets the eye.

This slot was developed by Booming Games and released in 2017, depicting a series of classic Egyptian symbols as the game is set in the area of Egypt where historically their leaders were buried. The symbols are hand-drawn and slightly animated. I did find the characters to be quite gaudy, all scantily clad and the women wearing low-cut bikinis. I’m not sure that’s historically accurate.

The game reminded me a lot of Valley of the Gods by Yggdrasil. Not only because of the name but also because of the presentation even though this slot obviously looks a lot less professional. Luckily, everything looks sharp and detailed and the symbols are easily distinguishable from each other.

The soundtrack was rather original and hardly fit the theme. There were some sounds like rattlesnakes when the reels spun that reminded me of the desert and there was a snake charmer’s flute in the music too. On the other hand, the music had elements of a comedy riff that confused me. All in all, it only partially succeeded in conjuring up the right atmosphere.

Valley of Pharaohs has the usual division of symbols with the high-paying symbols as original characters and the low-paying symbols based on high cards. The high card symbols are very basic and don’t fit the theme at all. All the symbols are only slightly animated when part of a win, usually rotating a little.

A recurring problem with Booming Games slots is that their special symbols aren’t distinguishable from the others. The Wild and Scatter symbols look the same as the other characters in the slot with only an ‘S’ and a ‘W’ at the bottom to denote their special function. Even though a symbol that simply says Wild or Scatter might not be as pretty, it’s a lot clearer.

All in all, the features offer no real surprises although I did like that you get to pick a random symbol that will act as an extra wild during the free spins mode. Of course, this is still random as you’ll see a book flipping through the different symbols. The only input the player gets is the moment in which the book stops flipping to see which symbol ends up being the random wild.

Stacked Symbols are a feature that doesn’t really require extra attention, since they only occasionally showed up and would often not stop to fill the reel with the same symbol. Given that each reel had its own symbols, the existence of Stacked Symbols would almost never result in any spectacular wins I would not have gotten without them. All in all, more a feature in name only.

Finally the free spins mode I already touched on a little bit. There is a short phase where you pick a random symbol but after that, it’s straight into the standard free spins mode. I got 10 free spins with 3 Scatter Symbols which is the industry standard. The extra random Wild did help in getting some more wins during the free spins mode which is why I wanted to trigger it, something that is missing in a lot of other Booming Games slots.

Valley of Pharaohs is a pretty standard slot from the pantheon of Booming Games slots. The graphics are acceptable although I found it odd how sexualised the characters were. The music is also quite confusing, not fitting in with the Egyptian theme.

It plays fine though and the extra Random Wild during the Free Spins mode made that part of the game more interesting. The gameplay is very simple and with the game’s Autospin function it doesn’t require the player to look at the game at all.

Players can look at the cost per spin to balance the risk, with a choice between £0.01 and £300 per spin. I found the maximum bet to drain my funds quite fast so I would recommend a more conservative approach. The max. win meanwhile is a respectable 1,011x your bet. The coin win was pretty low though, even with a five-of-a-kind win so keep that in mind.

Valley of Pharaohs is a simple, no-nonsense slot perfect for players that enjoy a quick play experience. Those that require some more innovation and excitement might do better looking for something else.

Play Valley of Pharaohs for free

Browse casinos with Valley of Pharaohs and other slots from Booming Games. Create an account and try the game for free before making a deposit.

You can play Valley of Pharaohs in English, Finnish, Swedish, German and 23 other languages. 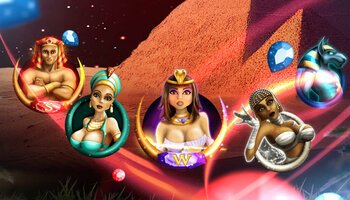