Valley Of The Gods slot review

Play Valley Of The Gods

Valley of the Gods takes place at the Egyptian location in Ancient Egypt where the honoured dead would be buried. Here, the Sun God Ra would use sacred scarabs to protect their treasures!

The game was released in 2017 by developer Yggdrasil and is set in one of the most popular slot locations: Ancient Egypt. The 5-reel, 5-row playing field is partially obscured by golden scarabs that unlock as win lines are hit. That means the minimal number of paylines is 45 but it can go up to a massive 3,125 paylines!

The game looks great, as I’ve come to expect from this developer. They put a lot of time in the graphics, creating different characters and symbols to fill the reels. The game is clearly set in the Valley of the Gods as we see a giant monument surrounded by vast plains of desert and pyramids in the distance.

There are also plenty of animations to liven up the game. There are different scarabs that are released when hitting a winning payline, as well as the two statues on either side getting charged and releasing their bonus features. It helps keep the game feel alive.

Musically I found the game to stay close with its roots: Middle-Eastern sounding music that amplified the sweltering heat the game is set in, sometimes enhanced with a winning tune.

There are a bunch of original symbols added to Valley of the Gods. Although they can be divided into high-paying and low-paying symbols, they don’t use any standard symbols that you would see in other games. I always appreciate that.

Although Valley of the Gods doesn’t have free spins or a bonus game in the traditional sense, it does shake up the base gameplay quite a lot. To start with, a quick overview of the features:

The first thing players will notice is that the corners of the playing field are hidden behind scarab symbols. This means that on reel 1 and 5 there is only 1 open spot, on reel 2 and 4 there are 3 and reel 3 is completely open. If there is a winning payline, the number of symbols that were part of the win will remove the same amount of scarabs and opening those slots on the reels.

So if I get a four-of-a-kind win, 4 scarabs will be randomly removed, opening up 4 additional spaces with which you can get a winning payline. Every time you get a win, there is also a re-spin. These re-spins continue for as long as there are new wins. Once you stop getting wins, the scarabs return and the field is restricted again.

I thought this was a unique variation of the system and kind of a reverse of the system Yggdrasil has used before in slots like Winterberries and Fruitoids. In those games, symbols become sticky before there is a re-spin and the game adds extra occurrences of those symbols to the reels. Here, it’s instead removing symbols, the scarabs, to open up the playing field.

With 5 scarabs, each statue improves itself. The multiplier adds a +1 multiplier and the free spins statue adds another win. If you have a big enough win, it’s possible either or both statues fill up repeatedly in the same spin!

This all works a lot easier than how I explained it here, and the game presents it clearly. You want as many winning paylines as possible and that can’t be a novel concept for anyone!

Valley of the Gods is a pretty standard slot when it comes to its theme, with Ancient Egypt being very popular for many developers. The graphics are excellent and I loved the great number of animations they included. Meanwhile, the gameplay is different enough to give it its own identity, with the inclusion of re-spins and an expanding playing field.

The multiplier and free spins were added to the game frequently but in low numbers, meaning that it wasn’t that rare to unlock the complete playing field but it didn’t necessarily mean any big wins either. I found this fit the listed Medium Volatility.

Even after playing for a few hours, I found my funds to stay pretty stable, although I did play with a low value per spin. It’s possible you can get some big wins if you bet big with a max. win of 5,800x your bet to look out for but I wouldn’t count on it. Instead, pick a bet between £0.10 and £100 per spin you’re comfortable with and enjoy!

Play Valley Of The Gods for free

Browse casinos with Valley Of The Gods and other slots from Yggdrasil. Create an account and try the game for free before making a deposit.

You can play Valley Of The Gods in English, Finnish, Swedish, German and 18 other languages. 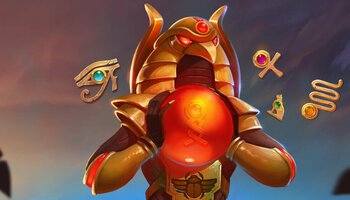