Vampire Senpai has the original idea of combining Japanese relations with vampires, creating this Quickspin slot which also includes free spins, walking wilds and expanding reels to play with as we try to either help or defeat the undead monstrosity.

This slot was released only recently, in 2020, which mostly shows itself in the way the graphics are presented. Even though the game has a 5-reel, 5-row playing field the game still has enough room to show off the different symbols. There are 40 paylines in total to get a win on, even though at first I thought the game used a cluster pays mechanic since the playing field is so big.

The background shows us a generic Japanese temple at an unknown location. The reels are filled with different characters and for the low-paying symbols, they used the usual card letters. I wasn’t blown away by the graphics themselves as they’re rather simple and don’t have a lot of animations. Getting a win also does very little, only lighting up the winning tiles.

As I come to expect from slots with limited creativity, the music also doesn’t go out of its way to do anything new. You’ll find a pretty solemn Japanese sounding song playing in the background during most of the game, with gongs or bells sounding when there’s a win. Only when any of the special features are activated do we hear anything a bit more original.

The game uses different characters as high-paying symbols which look pretty generic and are mostly differentiated through the use of colour. This makes the people look rather strange because the colours are just fully green or fully purple, no subtlety there.

Vampire Senpai only has a small number of symbols. In combination with a larger playing field and 40 paylines you might expect low volatility, but it’s not that easy to get a win and this lands the game on its Medium Volatility. Players can pick a bet between £0.10 and £100 to augment the risk they are willing to take somewhat.

Vampire Senpai has a limited number of features and the ones that are included aren’t very original, but there are a few twists to them that I thought fit the narrative pretty well.

The idea of the Wilds, which are the Vampire Senpai of the title, converting other characters into Wilds is a very fun idea and I feel it fit the setting very well. Unfortunately, this is the only level of creativity we can expect during this game and all other features are very basic versions of themselves.

You’ll spend most of the time in the base game. There are 3 different types of Wilds but they’re really only different in name only as they all function exactly the same way, both in the base game and the free spins mode. It makes it rather confusing without explaining why it is so confusing.

The free spins mode was a good source of wins without feeling like it will guarantee any big wins either. The Wilds in this mode become Sticky but they don’t stay in the same place, instead moving around with every spin.

I thought the features in Vampire Senpai aren’t very interesting. The idea of the Wild infecting other symbols and turning those into Wilds was definitely an exception, but unfortunately, that didn’t happen often enough and is also the only interesting thing they’ve done with the features.

If you’re looking for a slot with an Asian theme that doesn’t ask too much of the player, Vampire Senpai is set to deliver you the right type of experience. The features are simple if a bit redundant and the one original piece of it does make it fun to see happen. Unfortunately, as far as its concept and setting go, I doubt a lot of players will have this slot stay in their memory for very long.

One last thing to mention that might impact people’s decision to try it out is the max. win of 8,984x your bet. This is quite a big sum even when compared to other slots and it feels like a fair reward considering the rest of the game is rather bland. However, be aware that it would require a number of features to activate at precisely the right time to make it possible.

Players that enjoy classic slots or highly experimental games won’t like Vampire Senpai and safely give it a pass. This leaves the people that are fans of the normal slot machines, where there are variations on the number of reels and paylines but the basic gameplay is always the same. Give it a try and see if the features resonate with you, and you’ll know if this slot is for you within the first five minutes.

Browse casinos with Vampire Senpai and other slots from Quickspin. Create an account and try the game for free before making a deposit.

You can play Vampire Senpai in English, Finnish, Swedish, German and 16 other languages. 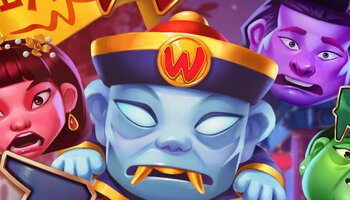