Vampires and Wolves rule the night in this Pragmatic Play game. Thankfully, you don't need wooden pikes and silver bullets to play - just bring along 10p per spin or more.

The game is about a weird encounter between two different anthropomorphic entities whose origins belong to the realm of old European folklore. It takes place on a reel set of three rows, five reels and 10 paylines.

For that matter, the Vampires vs Wolves may be attractive to some. In my view, the theme has been covered a lot in the world of online slots and Pragmatic Play doesn't bring anything new. But that's only in terms of graphic design.

Part of the gameplay are the two features that are quite familiar and widely-implemented in slots: respins and free spins. You may think there is nothing new to see here, but there is because the game has one defining strength regarding the potential payouts. That's coming up soon.

If vampires and werewolves were nearly as pretty as they are in the game they would have never been chased by angry villagers with torches and pitchforks.

The above would be true if they indeed existed at all. Since we don't know that for sure, let's just pretend that Vampires vs Wolves is a window into the uncanny capabilities of some members of our species.

Sadly, there is nothing that's uncanny about graphic design. The high-paying symbols consist of symbols that represent the human versions of the vampires and werewolves. Each category is marked by a red or a blue frame, respectively.

They do become their true selves during the free spins bonus, but the transition lacks animation and just isn't overly fun to experience.

I think the graphic design is alright - gets a passing grade, but it fails to woo you into the premise, unlike the solid paytable.

The game has a standard Wild symbol and two scatters. It would have been awesome if they were paying scatters, but they are not - they 'just' trigger the free spins bonus.

In tune with the title and the premise, the scatter symbols represent a vampire's castle and a wolf howling at the Moon. They can only land on reels one and five, but sadly, just one doesn't do you any good. To have the free rounds trigger, the scatters need to come on at the same time and in full view. The event triggers...

The game awards you 14 free spins where three of the six high-paying symbols transform into wolves and act as Wild. This way, the game awards you multiple Wild symbols which increases the chances of landing a big win.

The standard Wild is also present on the reels during the bonus, which is an added plus.

This mode of the bonus game comes with eight free spins. The corresponding high-paying symbols transform into vampires.

Any of the three symbols can transform into sticky Wilds and remain on the reel set until the end of the bonus.

The standard Wild is part of this free spins mode also.

I like that Vampires vs Wolves gives you the option to choose between low volatility and high volatility bonus game. The choice is up to you.

I've selected both on several occasions in my experience with the game. The Wolves spins are a 'safer' choice because you get 14 spins, but the Vampires can latch on the reel set and arrange for a wild surprise.

Sadly, the scatters are not part of the bonus feature.

As I said at the start, you can play Vampires vs Wolves starting at 10p per spin. The biggest bet is £50.00 and the range of betting options between the start and the end is quite diverse.

The game has a strong side in terms of the payout structure. One look at the paytable and you'll see any of the card suits' symbols can pay more than your bet in return for four of a kind on a payline.

The detail above is rarely seen in online slots. The same is true for the high-paying symbols. Three vampires or wolves can pay back the full bet or more.

The full paytable layout expressed in the respective value times your bet goes likes this:

I've seen the theme on numerous occasions and I've seen a variety of extra features. The game is a tough sell if you judge it by the graphics, but the features and the paytable structure are the details that matter the most.

I can recommend the game to any player out there. The choice of a free spins bonus mode and volatility makes the experience a bit more interactive, which is another plus.

The only glaring minus of Vampires vs Wolves is that it only has 10 paylines. This translates to the winning outcomes being spread out across a wider number of spins.

It would have been a very different game had Pragmatic Play decided to give it 20 paylines, but that doesn't prevent you from giving it a try.

Play Vampires vs Wolves™ for free

Browse casinos with Vampires vs Wolves™ and other slots from Pragmatic Play. Create an account and try the game for free before making a deposit.

You can play Vampires vs Wolves™ in English, Finnish, Swedish, German and 17 other languages. 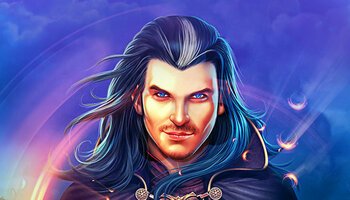